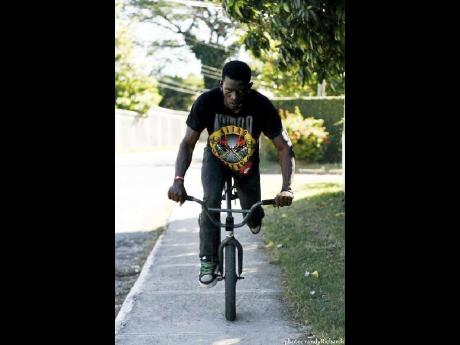 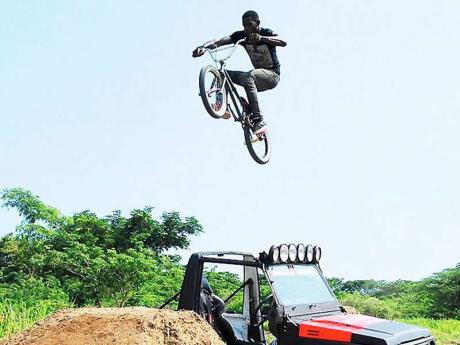 A-Wire jumps a jeep during a demo performace. 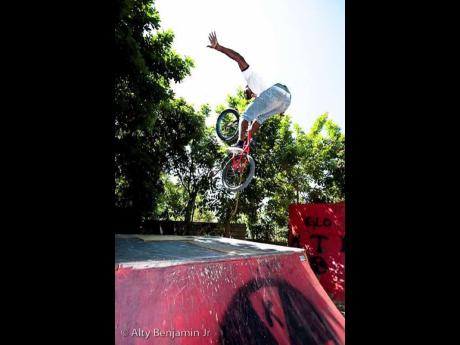 The crash-test dummy is the contraption simulating a human body used to scientifically test the results of a vehicle's impact under controlled conditions. A Canadian rock and folk music band has also named itself the Crash Test Dummies, one of its more popular releases being Superman's Song from the 1991 album The Ghosts That Haunt Me.

In Jamaica, a group of young men has adjusted the spelling to Krash Test Dummies, along with a switch in the accustomed mode of transportation. There was a definite 'wow' reaction when Automotives first saw the small group on bicycles riding the handrails and performing stunts in New Kingston recently. However, an 'ouch!' was soon to follow as an off-balance attempt tested one of the riders' testicular fortitude.

Fast-forward after the crotch-grabbing dramatics and the wow moments resumed as the Krash Test Dummies ran a training session in the commercial district. A common fibre keeps the group - consisting of a pastry chef, a visual artist, a carpenter and a body piercer - together. They just love to perform stunts - that coming with, of course, the occasional crash.

According to the Dummies' frontman Richard 'A-Wire' Lecky, the quartet got its name from an initial tendency to crash.

"The name came about around 2000 when myself and my mentor were sitting down one day saying we need to form a team, so we had to come up with a name. At the time, we crashed a lot, so we came up with that. It kind of explained what we did ... . We test our bodies; we test our bikes, sort of like crash-test dummies. Without fear, we just go for it and get it done. So the name kinda worked, so we just ran with it," he said, chuckling.

However, Lecky pointed out that the current group is a new set of riders, as the original members have taken a different path. "When people hear Krash Test Dummies, they usually expect to see cars or bikes, but then they see bicycles and they become interested," added Lecky.

The other members of the group are Roshaun 'Twisted' Lawrence, Jeff 'Tiggy' Crosley and Marvin 'Spliffy' Webster, and it is their love for riding that propels them to get on bicycles and perform dangerous stunts - the kind cable-television footage is made of.

Staying true to their name and their bid to claim roadworthiness, they have all had bumps and bruises here and there; a dislocated shoulder or two, a messed-up ankle and wrist, and torn ligaments. However, it's part of the fun for the Krash Test Dummies, who profess with conviction that "once you can think of it, it can be done".

They might have dummies in their title but that they are not, as it was pointed out that "stunt riding is a science". There was a prompt address to Automotives' queries regarding the features of the bicycles which are quite small, with what appears to be footrests attached to the front and rear wheels, and a low, almost non-existent seat. Mind-boggling formulae out the window, it was a simple explanation of gravity and each person finding their centre.

According to Lecky, "Each rider has his own riding style, so each person's centre of gravity is different, so we have to do it differently."

Joined by a curious youngster at this point, Lecky further explained, "My bike is low. The tyres are imported and they can hold 150 psi, and the bars are rotated at a 75 angle." Excited by the explanation, the youngster jumped onto the bike, begging permission to take it for a ride.

Owing to their theatrics and skills, the Krash Test Dummies has been making waves not just locally but also on the international scene. They have performed at major local events such as the Mountain Dew Stunt Festival and the Red Bull Smokin' Streets Roadshow. Internationally, in 2009, the Krash Test Dummies was invited to appear in an episode of the MTV's reality series 'Nitro Circus' with Travis Pastrana.

Lecky takes part in a number of projects, hoping to create a breakthrough for the Krash Test Dummies and other bicycle stunt groups in Jamaica.

"It's a lifestyle, and many persons don't know about it or follow it because Jamaicans are not fully aware of what we do," he said. "We do demos, commercials, music videos, [and] after-party shows. We basically do a lot of promotional work where we get branded by different companies."

In seeking recognition for the sport, Lecky is hoping to start a local BMX association to help other riders to find work and equipment, as well as to recruit prospective riders and create a regular calendar of activities that will add to the development and visibility of the craft.