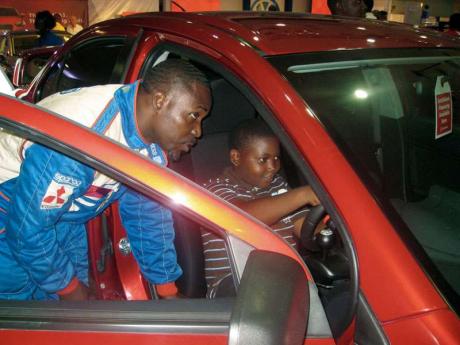 Courtney Wilson (left) shows a delighted youngster around the Playstation simulation driving of a Mitsubishi Evolution X on the opening day of the ADA Motor Show on Friday. - Photo by Mel Cooke 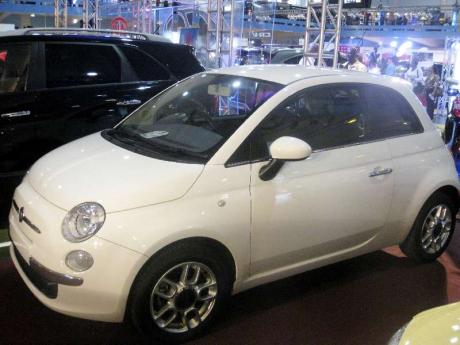 On Friday as the Automobile Dealers Association (ADA) Motor Show made its long-heralded return, unusually heavy rainfall soaked parts of the capital - including the National Arena on Arthur Wint Drive, indoor venue for the display of new cars.

So a noticeably sparse turnout of viewers did not perturb ADA chairman Kent LaCroix, who was confident that the crowds would come, as he opined the showers "held them back a little". Adding another component, he said "of course it is fairly close to the 25th", therefore many persons would be out doing grocery shopping.

"They will be here," LaCroix said. "The hype we have had has been prolific. I don't think there is anyone who has not seen one or two ads." The last staging was in 2007.

After the official speech making, vehicle introductions by Kingston Industrial Garage (KIG) and Stewart Motors marked the early proceedings of day one. Duncan Stewart, general manager Stewart Motors, spoke to not only the sixth generation of the BMW 3 series, but also the décor for which photographer Marlon James took pictures of Jamaicans who own BMW and Mini motor cars.

Stewart emphasised the car's eight-speed transmission and it giving better performance while returning improved fuel efficiency. Long-legged lasses stood ready to slip the covers off KIG's offering as more persons turned up for the new-car display. Based on past shows, LaCroix said "Normally they would gravitate to the SUV's, perhaps the ones newer on the market."