Portia must own the reform 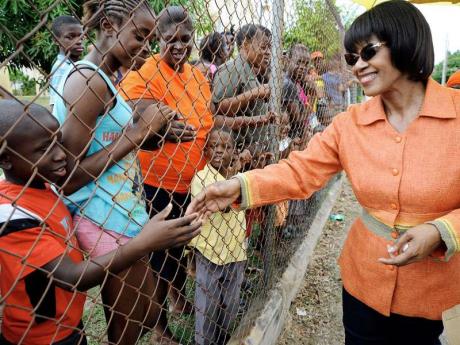 The countries that have been able to reform their economies for success have all had one thing in common: bold leadership that motivated their people to accept radical changes to their economic policies, the outcomes of which could not have been guaranteed. They were all sufficiently bold to accept the likelihood of grave political consequences.

Some, like Lee Kuan Yew of Singapore and Lula Da Silva of Brazil, were lucky and reaped the political benefits of success while in office. Others, like Erskine Sandiford of Barbados and George Chambers of Trinidad, were less fortunate and suffered ignominious rejection by their people. But the economic success of their policies would later invest them with iconic status, not only among their people but with many far beyond the boundaries of their homeland.

These leaders were confronted by monumental economic challenges as they began their terms in office. But through insightful and courageous leadership, they were able to change the economic fortunes of their countries in ways many would have thought impossible. The character they displayed in confronting the economic challenges they faced is what distinguishes real leaders from mere office holders.

For as long as I have been exposed to politics, Jamaican governments have been aware of the need for profound tax reform to restore the economy's health and dynamism. But their unwillingness to face the possibility of political cost has always left them frozen with inertia. As a result, the enabling economic environment within which genuine wealth-creating activities can be fostered has been absent, and the economy has floundered and left mired in a state of chronic dysfunction.

Overhauling the present tax system, under which economic competitiveness and productive enterprise have been stifled, is widely accepted as a necessary step to restoring the missing dynamism and functionality of the economy. Everyone accepts the need for reform, but no one seems prepared to stand behind the mix of reforms that would create the competitive environment required to produce the wealth the country needs. This is where insightful and courageous political leadership is needed. It is the responsibility of government, and it cannot be outsourced.

Gaining broad public acceptance of a national reform programme cannot be the duty of the Private Sector Organisation of Jamaica (PSOJ). Nor can the reform agenda that the Government eventually adopts be seen as dictated by that organisation: a body perceived by most ordinary Jamaicans as representing the interest of 'the big man'. Furthermore, it is potential political suicide for an administration, elected on a platform of love for the poor, to be seen as doing the bidding of the rich and powerful. For the reform effort to succeed, the Government must lead it and must be clearly seen as doing so.

Tax reform presents this new administration with perhaps its greatest economic challenge, even as it provides it with a glorious opportunity to unify the country around a historic project that has the potential to benefit all the people. While the PSOJ should be applauded for its initiative and effort, it cannot be the vessel through which this national consensus is forged. It might be tempting for the Government to hide behind the PSOJ to avoid the repercussion of possible negative public reaction to the reforms. But no one has ever cast a vote for a private-sector group.

The elected Government is the only entity in which the people of the country have invested their trust and confidence. It is, therefore, the Government that must shoulder the responsibility of leading change and garnering the confidence and support of the people for decisions about which they may be uncertain. The support of the political Opposition would be helpful, but in the final analysis it is the Government that must lead.

But before the Government's effort can succeed, it must clearly demonstrate that all its constituent elements are totally committed to, and believe in, the reform. Their support must be unequivocal and enthusiastic. There must be no room for doubt that tax reform is in accord with the core beliefs of its leadership and is being driven by its leader. No daylight can be allowed between the minister who fashions the reform and the leader of the Government who must promote it.

Comprehensive tax reform cannot be presented as an initiative of the finance minister alone. While it must be the task of the minister to design and build the bus of tax reform, it is the prime minister, who most commands public support and trust, who must drive it and bring the people on board.

Simply put, for tax reform to work, Portia must own it. This is her opportunity to display real leadership and not merely be the holder of the office of prime minister. She must be able to convince the average Jamaican, particularly the less fortunate, that the changes to our tax system are designed to benefit them, and that she is not simply doing the private sector's bidding.

In a sense, it is fortuitous that the PSOJ's proposals, though constructive, leave room for the Government to craft its own reforms that incorporate principles the diverse interests within the private sector can accept and support. If promoted as the means to achieve economic development and equity, broad support could be attracted.

Lowering the GCT rate from 17.5 per cent on most things to 10 per cent on all items will benefit all the people. In addition to this 43 per cent reduction on the currently taxed items they consume, the poor will benefit from a direct subsidy to compensate them for the application of taxes on items that are now exempt. Also, by ending the current system of GCT exemptions, unintended subsidies enjoyed by the better off will end, and the tax dollars involved will be released for other purposes which could benefit the poor.

Establishing a progressive income tax structure, in which low-income earners pay a smaller percentage of their income than the wealthy and large corporations, will provide a more equitable basis on which to finance the Government.

New jobs that will result from productive investments made by high-income earners and businesses to earn tax credits will relieve the country's deep and chronic unemployment and underemployment.

The boost to small and medium-size businesses that would result from a reduction in their tax rate to 15 and 25 per cent, respectively, would assist these businesses, which are universally the greatest creators of jobs, to increase employment.

The housewife who struggles with the high price of many basic foods will be relieved by the price reduction that should result when the present exorbitant protective duties are replaced by direct subsidies to the local producers who may need protection from cheaper imports.

With the reduction of the GCT rate and the removal of the excessive import duties on basic foods, tax reform will have the broader benefit of lowering consumer prices over a wide range of goods. The slowing of inflation that would result should lead to greater economic competitiveness. The spin-off effect of this in increased demand for Jamaican goods and labour will buoy the economy and provide it with much-needed momentum.

Will they be brave?

With the benefits of tax reform so attractive, it is very difficult to see why the Government would be unwilling to embrace and promote it. But not all politicians are distinguished by their bravery, particularly when there is a danger that their hold on power may be threatened. How the Government handles tax reform will, therefore, be a test of its true mettle.

The usual potpourri of petty tax-consuming programmes like JEEP, designed to impress the gullible that the Government is working, must be put on the back burner this year. The times call for serious structural change that will make our economy work for the people in a way it has not for several decades.

Tax reform could be the defining issue of our time. The Government can give 'mouth water' support to it and allow the economic stagnation that has denied our people the upliftment that nearly all our neighbours and trading partners have been enjoying for years; or it can embrace reform and reorganise the Jamaican economy for development and prosperity.

The moment calls for leadership; not the narrow, opportunistic politics that has characterised life in Jamaica for too long.

Claude Clarke is a businessman and former minister of trade. Email feedback to columns@gleanerjm.com.