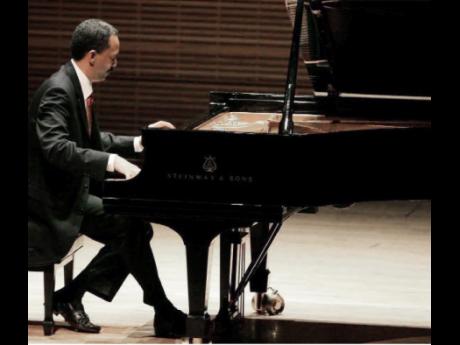 As the famed Red Hills Road school celebrates its centenary, April is the month for music at Calabar High School. The themed monthly celebrations mark the achievements of Calabar in media, journalism and communications, sports, music and entertainment, law and politics, public service, business and finance, among others. A gala dinner in September caps off the celebrations.

Trumpeter Mickey Hanson, a Calabar old boy, said that two events will mark the month, a symposium slated for April 19 in the school's chapel and a 'Keys of Calabar' concert in the Gardens of The Jamaica Pegasus hotel on the 29th. Hanson and Orville Hammond are the common threads between the two, producer Mikey Bennett slated to speak on the place of music in today's economic environment at the symposium.

"We are showing the youngsters it is a big industry. It makes more money than so many others. There are so many areas people can go into," Hanson said.

The concert takes its name from the presence in the line-up of four accomplished pianists/keyboard players, Leslie Butler, Orville Hammond, Dennis Rushton and Othneil Lewis. Trombonist Carlos Malcolm, Rohan Reid (guitar and bass) Hanson and Phillip Harry are also in the line-up. On its classical side Orrett Rhoden and Kestner Robinson are part of 'Keys of Calabar'. Singer Myrna Hague is the concert's special guest.

Ironically, music was not offered at Calabar when Hanson was a student and he said even now is not offered beyond a junior level, this despite a relatively new music department and the donation of instruments organised by a few old boys. He points to the extensive music programme in United States schools, noting its long-term effect on the students.

Brighter than the others

When he was a student at Calabar, Hanson said, it was very noticeable that the boys whose parents sent them to piano and violin lessons "were a lot brighter than the others". As boys they could not explain it then, but music's development of mental faculties is well known. "There are so many positive things said about music at that age," Hanson said.

But he puts the perception of music at that period of time in the context of other 'almost ran' subjects. "They sent you to do art and woodwork when you could not do maths and physics," Hanson said, adding that when someone masters these areas, they are often in a very good position.

"There is still this need to grasp music as an academic activity," Hanson said. "It is still not something to be taken as seriously as math and biology for development."

He looks at his own music development in considering the importance of the symposium and concert to current Calabar students.

"My parents did not send me to piano or anything like that. I had this desire to play that trumpet and went after it. It was painful," Hanson said. "I was in that first wave (of musicians) that found itself in the School of Music when they were not playing pop and jazz and so on."

The activities also serve as a rallying point for a cause that Hanson has been pushing for some time, trying to get musically accomplished old boys to have some interaction with current students. The events, Hanson hopes, will give that initiative some impetus.

And although the Calabar programme is still growing, Hanson hopes that it will develop to the level where it is world-class and helps form a template for the development of music programmes in the country, informed by the symposium. "We will be hoping to come up with a national suggestion," Hanson said.