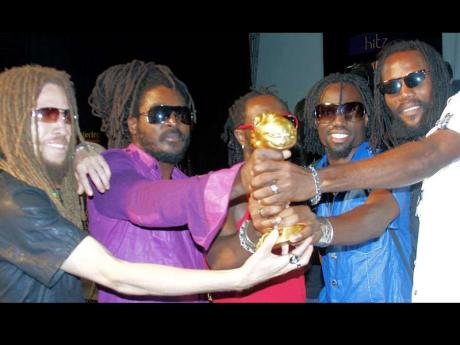 The Dubtonic Kru holding the Global Battle of the Bands trophy they won last year. - Contributed

Currently on a tour of the United States (US), Dubtonic Kru is already pleased as the group was one of two Jamaican acts to be featured on South by Southwest Conference and Festival.

The band kicked off its US tour in Chicago, Illinois, on March 14 and followed with the Wildfire Reggae Festival in Austin, Texas a few days later. However, one of the biggest accomplishments since the start of the tour was the group's appearance and performance at South by Southwest (SXSW). This is a set of film, interactive and music festivals and conferences that take place every spring (usually in March) in Austin, Texas. SXSW began in 1987, and has continued to grow in size every year.

"It was good. It was a great musical conference and festival for all genres of music. It was a great place for exposure and networking. It was a chance to meet and greet people from all over the world. It's one of the world's biggest music concerts," said Jubba White, a member of the band.

To be included in the concert, groups or individuals send applications, but this does not mean an automatic acceptance.

According to White, Dubtonic Kru did not have to apply, they were sent an invitation.

"We were actually invited. It is a great feeling 'cause what people have been watching is our progress and our contribution to the industry and saw it fit that this is something that we should be part of. We feel good, we feel honoured," he said, noting that Protoje and his Indiggnation Band was also present at the event.

Their participation in the festival comes after being given a congressional proclamation from the congresswoman in New York at the Reggae Culture Salute that was put on by Coalition to Preserve Reggae Music in November.

With 17 shows left in places like Wisconsin, Ohio, Missouri, Alabama and Iowa, White said he is optimistic about what else is left.

"We are looking forward to a great tour 'cause it started nicely. It is no easy work, it's a lot of challenges. We are doing this on our own. I know Jamaica still doesn't know the impact, but we are touching some areas and leaving some waves," he said.

White said the band has even made an impact in states that reggae and dancehall music are not usually popular.

"It's great. In Minneapolis and Madison, we will be playing to sold-out shows. When we get back to Austin, I think we are going to have some good following because of the impression we left there. Every single day we have been doing radio interviews," he said.

"Mi nah go tell yuh seh every show we do sold-out but for the greater part, we really gained a whole heap of traction. We have been fairly good ambassadors based on the reviews that we have been getting."

After the tour ends on April 28, White said they will return to Jamaica to complete their album, Evolution. With the songs complete, he said the group will select the tracks that will be included in time for a release scheduled for the last quarter of this year.

But even before the album is released, White said Dubtonic Kru will have performances in Eastern Europe, Japan, India and the United States.

Also on the agenda is the possible resumption of the popular Plug N' Play event that was a regular fixture at Wyndham Kingston hotel's Jonkanoo Lounge.

"Plug N' Play will return. It is not dead. All of what we were doing, so far, was out-of-pocket. It became strenuous, so we just decide seh wi ago tek a likkle break," White told The Sunday Gleaner.

"It soon come back, and we promise that we will try to make it bigger and better. However, we are appealing to corporate entities to put more support behind the industry."