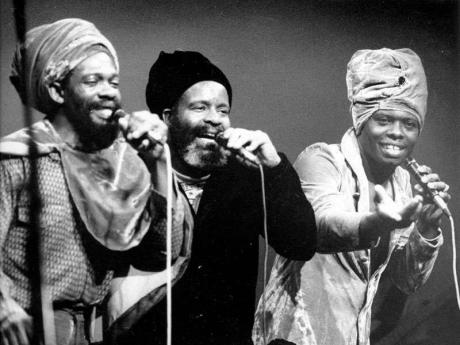 "There is a land

Where there is no night

There is only day

Look into the book of life and you will see

That there is a land, far, far away

Satta Massagana is an undeniable anthem of reggae, an ode to the African motherland that has stood the test of 40 years since its recording by Bernard Collins, Donald Manning and Linford Manning in 1969.

Translated literally from Amharic the title and refrain mean "give thanks", but Collins told The Sunday Gleaner that "the first 300 to 400 copies" were released as Far Away Land. That came from the first line, which Collins wrote, although he makes it clear that Satta Massagana was a team effort.

"There was a land far, far away is an old phrase ... . Is just that me put it in a different context," Collins said. "The inspiration come to me t'rough me a look forward to Africa. We a talk bout the land far away which is the New Jerusalem, the New Zion."

The complete phrase means "give thanks continually".

It was recorded around midday at Studio One, Collins (who defines himself as the original Abyssinians lead singer) saying that he paid £100 for the recording session as he did not want to record the song for Clement Dodd. Not only did The Abyssinians go into the studio armed with the tools of independence, but also the chord progression of the song on acoustic guitar.

There were two songs from that high noon session for The Abyssinians' debut release, the other being Jerusalem, which was written by Donald Manning.

Collins describes a tough promotional push, the trio riding bicycles around Kingston with the two records and popping into sessions with the hope of getting played on the sound systems. "We were wondering which song was the bigger one. Is long after that Satta Massagana get popular," Collins said.

He said six weeks after Satta Massagana was released, Joe Gibbs did the instrumental A So with the Destroyers, to which The Abyssinians replied with Mabrack, asserting "you tink a so/a no so/this is it/the original hit/satta massagana". "Even up to now people a record it. Is a song that keep growing and growing with the people," Collins said.

Although anthemic in status, Satta Massagana was not a chart hit. Putting it in the context of HIM Haile Selassie's visit to Jamaica in 1966, Collins claims that it is one of the first Rastafari-themed songs and "is a song you have to say ban".

Among the first performances was one at the present location of the Spanish Court Hotel, New Kingston, at a show put on by Tommy Cowan. Among Collins' most memorable renditions are the audio-visuals in the movie Rockers and documentary Roots Rockers.

Last March Collins toured Europe, the trip extending into Israel, with the Congos, and this Friday Collins will perform at Redbones Blues Café, New Kingston. It is a rare Jamaican appearance, as the last major showing was at Rebel Salute 2007.

In-between have been two smaller appearances, one at a Reggae Month event at the Edna Manley College of the Visual and Performing Arts and another for the band Chakula as they celebrated the life of a member.

"The song keep going and going although we no earn no big money from it. But is the sufferer's song," Collins said.