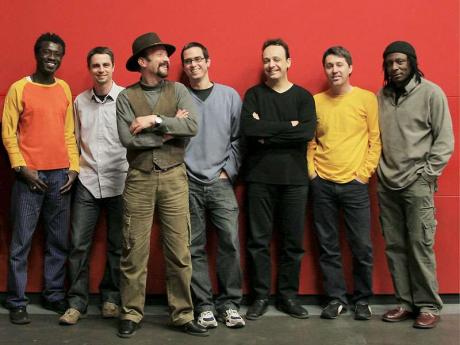 As the bass drums kicked into blend with the other six instruments, I looked around to see if my head was the only one bopping.

Luckily, I was not.

A tambourine, three guitars, a violin, a saxophone, and drums created a sound that resonated throughout the Courtleigh Auditorium, taking patrons on a journey with Algeria-born singer and instrumentalist, Fethi Tabet last Thursday night in a concert organised by the Alliance Française de la Jamaïque.

Although the majority of his dialogue was in French, it seemed as if most of the attendants were fairly familiar with the language.

He performed several songs that had patrons clapping and rocking in their chairs, seemingly enjoying themselves, but he wanted more.

This being his first trip to Jamaica, Fethi Tabet said he had always heard about the island and one of the things he had heard was that there were talented dancers there and that Jamaicans loved to dance.

So throughout the remainder of the performance, Fethi Tabet interacted with patrons, hand-picking some to join him front stage to dance. At one point, more than 15 were there dancing.

Members of his band did translations of what he said between songs whenever they understood enough to do so.

He told patrons that most of his songs were about love and that all humans were the same, regardless of colour, religion or language.

Music, he said, brings everybody together as the universal language.

As he neared the end of an almost two-hour-long performance, the audience seemed to be really enjoying themselves.

Before exiting the stage, Fethi Tabet introduced the band members and the instruments they play and from the little French I recognised, I believed he said thank you all for participating and also thanked the Alliance Française de la Jamaïque for putting on the event.