The Church and human rights 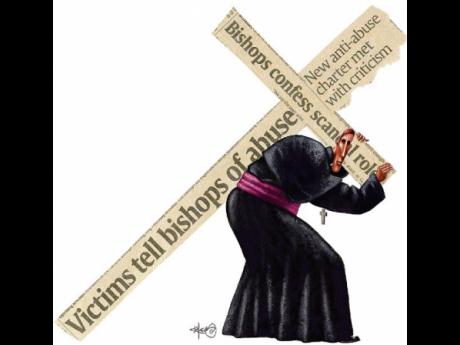 The outrage over the killing of 16-year-old Vanessa Kirkland, which has even drawn the tongue of the normally quiescent Jamaica Council of Churches, reminds me of how far humanity has evolved in our moral understanding and practice.

The fact of the matter is that the killing of infants, not just teenagers, was common and accepted in much of humanity's history. All cultures practised infanticide. Until relatively recently, up to 15 per cent of all babies were killed shortly after they were born, and in some societies the rate was as high as 50 per cent. Children were sacrificed to gods, commonly sold into slavery and religious servitude, and subjected to the cruelest forms of corporal punishment.

Children were also subject to legal punishment. A seven-year-old girl in 18th-century England was hanged for stealing a petticoat. And as late as the turn of the 20th century, German children were regularly placed on red-hot stoves if they were deemed stubborn, or tied to their bedposts for days.

I was reflecting deeply on the moral passion and disgust which have attended young Vanessa's death - and I noted Cliff Hughes' rage on Wednesday evening - while I was noting a raging debate between Daniel Thwaites and Hilaire Sobers over Christianity and human rights.

Sobers, a strident secularist, holds the "overarching thesis that the closer the State is to the secular end of the continuum, the more likely it is to expand individual freedoms rather than contract them". I believe he is absolutely right, and that history is incontestably on his side. But I also believe that young Thwaites, reared a Catholic and trained in philosophy, is also right in his overarching thesis that "morality delivered to us by pure reason has a content that is too 'thin' to ground many of the rights I suspect Mr Sobers wants to justify".

I now set out to prove the two combatants right, though they have argued at cross-purposes, with each not being as generous with the other intellectually as he ought to be (though Daniel was far more generous in spirit and achieved a greater balance than the too-incendiary, Richard Dawkins-like Sobers).

Interestingly, I have just finished reading leading Harvard evolutionary psychologist and cognitive scientist Steven Pinker's magisterial, 800-page book The Better Angels of our Nature: Why Violence Has Declined (2011). This empirically rich, historically sweeping and intellectually stimulating magnum opus on the history of violence in all civilisations was a hair-raising read. Pinker is a strident atheist, like the late Christopher Hitchens, Richard Dawkins, Sam Harris, and Victor Stenger, but he is a master at backing up his arguments.

He says, for example: "For almost a millennium and a half the Judaeo-Christian prohibition against infanticide coexisted with massive infanticide in practice." And this is an issue that people like Earl Thames, who is too easily impressed with Christian defences of "the moral foundations of law", fail to acknowledge: That while Christianity might proclaim certain philosophical positions, living flesh-and-blood Christians and their institution, the Church, have often trailed secularists in defending and institutionalising those positions and principles.

So no matter how much the Bible is used to justify human rights, and Christianity credited with the notion of individual liberty and dignity, what these unbalanced Christians always fail to address is why, despite the fact that all these lofty principles are in the Bible, it is only when secularists began expounding and fighting for these values, and when historical shifts took place, that Christians began to draw attention to these biblical passages? (Not to mention totally neglecting other, deeply disturbing passages which seem to run violently counter to those human-rights values.)

It is after secularists began developing a humanistic critique of slavery and human bondage that Christians joined the struggle. Daniel Thwaites is right that theism provides a more secure philosophical grounding for human rights, but he must wrestle with Hilaire's unimpeachable thesis that it has been secularists, influenced by the Enlightenment, who have provided the philosophical underpinnings for the attack against various forms of degradation.

The Bible that Christians read from opposed infanticide and child oppression all the time that children were being routinely murdered by their mothers. In 1527, a French priest wrote: "The latrines resound with the cries of children who have been plunged into them." And many of those children who survived were sent to workhouses where, as Dickens wrote in Oliver Twist, they were "without the inconvenience of too much food or too much clothing".

We have to credit the outrage over Vanessa Kirkland's death more to the human-rights revolution rather than to nurtured Christian sensibilities.

As Professor Lynn Hunt says in the book Inventing Human Rights: "The equality, universality and naturalness of rights gained direct political expression for the first time in the American Declaration of Independence in 1776 and the French Declaration of the Rights of Man in 1789."

Thames and other Christians would be quick to point out that the American Declaration of Independence refers to "all men being created equal", and they will say the framers of the Constitution were Christians (Well, more correctly, they were deists). The fact is, however, that it was more likely the indirect influence of the European Enlightenment which caused the revolution in thinking. The stream of intellectual consciousness runs deep and wide.

I concur with Pinker: "I would argue that Enlightenment humanism, whether invoked explicitly or implicitly, underlay the diverse humanitarian reforms of the 18th and 19th centuries. The philosophy was explicitly invoked in the design of the first liberal democracies, most transparently in the 'self-evident truths' in the American Declaration of Independence. Later, it would spread to other parts of the world, blended with humanistic arguments that had arisen independently in those civilisations."

Pinker, in his tome, demonstrates that: "Medieval Christendom was a culture of cruelty." There were burnings at the stake, pulling apart by horses, breaking bodies on the wheel, and disembowerment by winding a man's intestines around a spool" - all in the name of the Christian God.

People were burnt for matters like apostasy, heresy, criticism of government, gossip, scolding and adultery. Torture was used legally to extract confessions. Torture executions were a form of popular entertainment, attracting throngs the way sporting events do today. Says Pinker graphically: "Bodies broken on wheels, hanging from gibbets or decomposing in iron cages where the victim had been left to die of starvation and exposure, were a familiar part of the landscape."

The Christian Crusades claimed about six million lives and the barbarities meted to Jews by "good Christians" were spine-chilling. Even that so-called champion of individual liberty and conscience Martin Luther, founder of the Protestant Reformation, advised in his polemic On the Jews and Their Lies: "First, set fire to their synagogues and schools ... . Second, I advise that their houses be razed and destroyed ... . Fourth, I advise that their rabbis be forbidden to teach henceforth on pain of loss of life and limb ... . I advise that safe-conduct on the highways be abolished completely for the Jews."

Another great reformer, John Calvin, said, "We muzzle dogs, shall we leave men free to open their mouths and say what they please? God makes it plain that the false prophet is to be stoned without mercy. We are to crush beneath our feet all natural affections when his honour is at stake."

We could go on and on. It was Voltaire who said when people believed all kinds of absurdities, they would commit all kinds of atrocities. Theocratic governments have always been oppressive and rights-denying. Today, we only decry the Muslim theocrats, but Christian theocrats are to be feared, too. The Church and State must remain separate - to protect the rights of all of us, including Christians themselves who are more likely to be persecuted by other Christians for their 'heresies'.

History is not ambiguous on Hilaire's thesis: Theocracy is bad for human rights. But Christianity itself need not be a threat to human rights, certainly not now that our consciousness has been raised through the rights revolutions.

And Daniel Thwaites was making an eminently sensible and strategically important point when he was humbly advising Hilaire not to be so strident in alienating Christians. Daniel is no fundamentalist. But he is right that human rights is philosophically unstable outside a theistic foundation. Even atheists have noted that. Talking about "inherent dignity of every human being" is theological language too presumptuous for humanism. You have to read Michael Perry's Human Rights as Morality, Human Rights as Law for a brilliant defense of that thesis.

But hear Australian philosopher Raymond Gaita, a secularist, in his book Thinking About Love, and Truth and Justice: "If we are not religious, we will often search for one of the inadequate expressions which are available to us and say what we hope will be a secular equivalent. We may say that all human beings are inestimably precious, that they are ends in themselves, that they are owed unconditional respect, that they possess inalienable rights and, of course, that they possess inalienable dignity ... be that as it may: Each of them is problematic and contentious. Not one of them has the simple power of the religious ways of speaking." A significant admission.

And if a non-theistic, evolutionary view of life is correct, how can we justify 'species-ism' and put human welfare ahead of animal welfare? How can we justify killing animals to eat and using them in experiments to advance human welfare? Besides, if humans are merely a part of nature in a naturalistic universe and nature is unquestionably violent, why should humans be ethically constrained to be any different?

Hitler said he saw no reasons why man should not be as violent as nature. If we are not theists, on what teleological grounds can we refute that? Atheism ends up being philosophically parasitic, living off the heritage of religious presuppositions, however poorly implemented by religious people themselves.

It's time humanists and theists work together without the arrogance.

Ian Boyne, a veteran journalist, is the winner of the 2010-2011 Morris Cargill Award for Opinion Journalism. Email feedback to columns@gleanerjm.com and ianboyne1@yahoo.com.