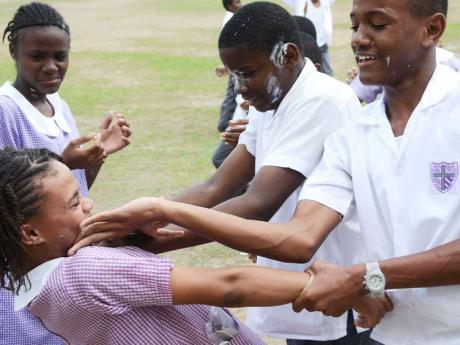 This year's writing of the Grade Six Achievement Test went by last Thursday and Friday and 44,000 'traumatised' 11-year-olds - and their parents - can breathe again, at least until results time in June.

More students registered than actually took the test. Of the 52,000 who registered, the Ministry of Education 'deferred' 3,500 to next year's sitting and 4,500 were barred from GSAT, having not achieved mastery in four sittings of the Grade Four Literacy Test. The majority of the 44,000 candidates are vying for a place in around 20 top-tiered high schools, while there are about 150 secondary-level schools in the country. These numbers, from a purely historical perspective, are very interesting.

As a quick demographic aside, at 52,000 potential candidates, there are fewer children taking the test than the near 60,000 who did so in its early years, an indication that the population growth rate is slowing.

Dogged by several difficulties, GSAT, unfortunately, is now more widely regarded as a problem rather than the major achievement in education policy and development that it is. GSAT replaced the Common Entrance Examination (CEE) in 1999. A Norman Manley administration, with Florizel Glasspole as minister of education, introduced the CEE in 1958, which offered an unprecedented 2,000 free places in high schools each year. Prior to the CEE, the majority of high-school students were the fee-paying children of the well-to-do, with only a handful of parish scholarships available through which the bright poor could gain access. The CEE, an entrance examination pure and simple, offered merit-based scholarships to a far larger number of children, revolutionising access to secondary education.

But the CEE soon hit major snags. While increasing the capacity of existing high schools, about 45 of them from colonial times, the Government did precious little to increase the number of schools. St Thomas, for instance, did not have even one high school before 1960. It soon became obvious that the children of the better off, benefiting from fee-paying private prep school education, were seriously outperforming children in government primary schools for scarce high-school places.

To rectify the problem, the Government of the 1960s, early into Independence, with Edwin Allen as minister of education, introduced the 70:30 ratio in favour of the far more numerous but more weakly performing primary-school students.

One of the better legacies of the colonial era was the dense network of primary schools across the country. Nearly every village had its own, and every child was within walking distance of a primary school. Even today, there are 'uneconomical' primary schools with a couple of teachers and a couple dozen students. The geography and settlement patterns of Jamaica, a mostly mountainous country, dictate that primary education has to be highly localised if universal access is to be achieved.

We came to Independence with pretty much universal access and have maintained it. Schools were built in new urban centres and added to expanding townships. Access was never the issue at the primary level, but quality and performance.

The Government of the 1960s vigorously set about expanding access to secondary education, but, in hindsight, went about it the wrong way. Armed with World Bank money, 50 junior secondary schools were 'built by Labour'. The junior secondary school took tens of thousands of students to grade nine, age 15, and left them high and dry. The Secondary School Certificate was a ticket to nowhere. It did not articulate with further education or with work.

Quality and performance have been critical issues in education in Independence. The failure of the primary school to deliver universal literacy led to the creation of the Jamaican Movement for the Advancement of Literacy (JAMAL). JAMAL, intended to be a short-term fix, substantially reduced adult literacy but ran for more than 25 years under that name before its transformation into a broader adult-education programme. The primary school kept pumping out illiterates who, with open access, went into and through the secondary-school system, pulling down the performance of the non-traditional schools.

But going back to the numbers, only 4,500 students of a cohort of 52,000 have not achieved a level of mastery in the Grade Four Literacy Test after multiple attempts. That's 8.65 per cent. While no cause for comfort in the quest for universal literacy, it does show what can be achieved when we are serious about literacy.

CXC examinations, which began at the end of the 1970s, provided an effective means of tracking performance in the secondary-school system within the country and across Caribbean territories. Thanks to our learner readiness and quality issues, Jamaica has consistently ranked near the bottom of CXC performance among CARICOM states. Fewer than 10 per cent of CXC cohorts were passing the minimum five subjects, including English and mathematics, required for entry into college-level post-secondary education. Most of the students in the new secondary schools weren't even candidates. So despite the massive expansion of secondary education from the '60s forward, the majority of the nation's children have not been achieving a secondary-level education from which they can transition into tertiary education or entry-level professional work.

The HEART Trust/NTA was the response of the Seaga Government of the 1980s to the absence of achievement of proper secondary education and the acquisition of skills by the majority of the nation's young people. HEART/NTA marks 30 years of existence this year, and the problem is still with us, with some 70 per cent of the labour force having no certified skills.

Four years before Independence, the Government established the Jamaica Institute of Technology (JIT) to provide post-secondary technical education beyond what the Kingston Technical School, established in 1896, offered. JIT was renamed the College of Arts, Science and Technology (CAST) in 1959 and was transformed into the University of Technology in 1995.

In hindsight, Government took far too long to establish national universities alongside the regional University of the West Indies. CAST had to fight with its own Government for degree-granting status. Why is there only a single UTech (albeit now multi-campus, including a Western Jamaica campus) with only 12,000 students? Why is there no articulated system of technical-vocational education from primary to tertiary level, a need which was recognised from at least the 1940s? For most of its existence, the HEART Trust/NTA wasn't even part of the education system, but was a standalone attached to Industry?

Matching any of the previous 'revolutions' in education in importance was the significant expansion of post-secondary education in the 1990s, pushing the post-sec population up from a mere five per cent of cohort to around 15 per cent today. There has been an explosion of onshore and offshore universities.

A serious emergent problem is the adequacy of supply of qualified students coming out of secondary education prepared for tertiary education. On current trajectory, of the 52,000 GSAT cohort this year (those eligible to take the test, not those who actually took it), no more than about 5,000, after five years of secondary education, will qualify for matriculation into college-level education. The wastage of the nation's young people is enormous and shocking.

The GSAT itself is part of a major development in education in the 1990s, the establishment of the National Assessment Programme (NAP), consisting of a Grade One Readiness Inventory, a Grade Three Diagnostic Test in English and mathematics, a Grade Four Literacy Test, and the Grade Six Achievement Test. NAP provides a powerful tool for the management of primary education.

In the anxiety of GSAT preparation and writing, both Government and people are forgetting that GSAT was supposed to be an 'achievement test' for the whole of primary education, and not merely a placement test for secondary school. With the scarcity of desirable 'good' places, for good historical reasons, the test is bound to be a fiercely contested placement competition. A GSAT review is now getting under way. Education Minister Ronnie Thwaites said there is overwhelming dissatisfaction with the GSAT curriculum, with the method of testing and with placement.

Vision 2030 has a whole National Outcome section for 'World Class Education and Training'. "Under Vision 2030, our country will develop an education and training system that produces well-rounded and qualified individuals who will be empowered to learn for life, able to function as creative and productive individuals in all spheres of our society and be competitive in a global context."

We are into 50 years of Independence; and 2030 is a mere 18 years away. But that's more than enough time to transform early-childhood education to produce universal learning readiness; primary education to produce universal literacy, broadly conceived; to have the vast majority of secondary-level graduates earning a standardised high-school diploma; to create a system of articulated technical and vocational education; and to have at least a third of the population achieving degree-level tertiary education.

But we will need a vibrant economy to absorb those products of an upgraded education system. At the moment, we are exporting some 80 per cent of our few best successes, tertiary graduates.