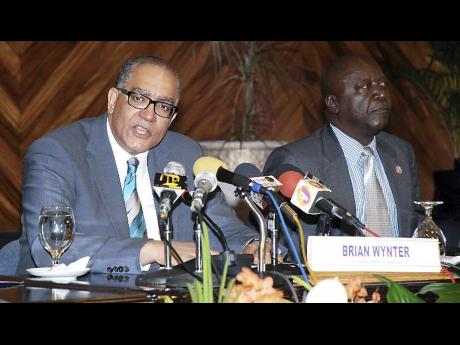 Weeks ago (February 19; 'Where's this 'growth' to come from?'), I predicted: "The US isn't decisively emerging from its recent recession any time soon. In fact, I guarantee you it'll be sinking into a new, deeper recession within the next 12 months ... . Rapid inflation is on the way both in the US and in Jamaica. Soon, [US] interest rates, kept artificially low for some time now, will start to rise."

As usual, textbook economists, permanently ensconced on the talk-show circuit, volunteered contrary prognoses. On February 21, despite admitting that global growth had slowed down in the last quarter of 2011, the Bank of Jamaica (BOJ) governor relied on estimated 'accelerated' growth during that quarter in the US to predict generous growth and low inflation for 2012. Everybody insisted the US economy was in real recovery.

Based on my preferred economic indicators, I predicted: "... We're about to see hyperinflation in Jamaica this year, followed by that which follows inflation as night follows day, namely, higher interest rates. Suddenly, all that borrowed money invested in those concrete structures will begin turning into non-performing loans (again) and our banks will find themselves in trouble (again)."

As to the prospects of digging ourselves out of that hole, I wrote: "Meanwhile, America will be in a tailspin; Europe will have buckled under its own financial crises as Germany, England and France scramble to distance themselves from poor relations, Greece and Italy; America, whose banks are exposed to European debt to the tune of more than US$1 trillion, will fall deeper and deeper into a recession, from which it might never recover."

Subsequently released statistics show that the US trade deficit increased in January by 4.3 per cent from US$50.4 billion to US$52.6 billion. During that month, personal income increased by 0.3 per cent. For the fourth quarter of 2011 alone, the US current account deficit increased by $16.5 billion (or 15 per cent over 2010's fourth quarter), contributing $124 billion to an overall deficit for 2011 of $473.4 billion (up $2.5 billion), while gross domestic product (GDP) growth (annualised) was three per cent.

The federal deficit is still hovering at around nine per cent of GDP, twice what's considered unsafe. US monthly inflation in 2012 was 2.93 per cent (January) and 2.87 per cent (February). Despite positive noises from its government, key indicators in the so-called recovering US economy took a nosedive last year's fourth quarter. That dive has continued in January/February 2012, resulting in inflation for those months returning to 2008 levels. The president's approval numbers, briefly on the up, have also plummeted, as individual economic realities fail to match optimistic official rhetoric.

Back at the Jamaican ranch on February 21, the BOJ governor defied the obvious realities to announce: "The bank is currently anticipating a moderation in the average price of crude oil for the near term."

Instead, a continuing sequence of weekly gas price increases has reached an unbearable stage, with no end in sight. And, with all the Middle East sabre-rattling now fashionable, crude oil prices are nowhere near peaking.

Scotty: "Riddle I dis and riddle I dat,

Guess I dis riddle and perhaps not."

Does anyone need BOJ/Planning Institute of Jamaica stats to solve the riddle of the REAL 2012 inflation rate? Trotting out standard inflation projections for 2012's first quarter despite the in-your-face reality of its first six weeks, the governor said: "Domestic inflation is projected to be in the range of 1.0 per cent to 2.0 per cent for the March 2012 quarter, largely similar to the out-turn for the December quarter. Underpinning this outlook is the forecast for a decline in imported inflation supported by relative stability in the exchange rate."

But 'imported inflation' (excluding fuel costs) was three per cent per month in January and February 2012. The exchange rate reached J$86 to US$1 in July 2011. It's now J$87.30 to US$1. On which planet does our BOJ governor live? When the spike in crime is added to our economic travails, there's no sane reason to be sanguine about the local economy's future.

Already, banks are beginning to feel the predicted squeeze. On March 7, 2012, The Observer reported: "Data from the central bank showed total commercial bank loans outstanding at end of December stood at $266 billion, which means NPLs [non-performing loans] totalled $23.15 billion, up from $19.75 billion at the end of September.

"National Commercial Bank Jamaica's (NCB) non-performing loans were worth $7.4 billion on December 31, up from $6.7 billion at the end of September."

The Gleaner has reported: "NCB Deputy Managing Director Dennis Cohen, answering a question at an investors' forum on the release of the bank's first-quarter results, would only say that the bad loan related to the construction sector,"

Need I say anything more?

Over in Britain, where perpetual squabbling threatens to rend the Tory/Lib Dems coalition asunder, putative Chancellor of the Exchequer George Osborne decided, a week before the new budget, to holiday in the US and take photos with President Obama. He's left the real budget crafting to chief economic adviser, Rupert Harrison, often referred to as 'the real chancellor'.

Similarly, our putative finance minister has been flitting off to Washington to flirt with the IMF at a time when he should be doing the nitty-gritty, daily grind of putting together the next Budget. But, perhaps, like Chancellor Osborne, he has a finance minister II (with whom he never disagrees?) to craft the Budget for him. And they're both working for an electorate who can't make up its mind about dismissing them.

Fly away, Peter! And fly away, Paul!!

Whenever, however this Budget is completed, it should try foreseeing dark financial times ahead. Our leaders must realise we can no longer afford this revolving door of political opportunity whose overriding principle is 'today for me; tomorrow for you'. At some point governments must begin to budget for Jamaica's long-term development.

"Room for rent, apply within.

Brilliant reggae lyricist, singer (yes, singer), dancer and, most famously, DJ David 'Scotty' Scott was one of the finest products of Derrick Harriott's Musical Chariot. A Kingston Tech graduate, he was unusual, being a singer first with groups The Federals (Penny For Your Song) and The Chosen Few (Psychedelic Train) before reinventing himself as a toaster/DJ.

His seminal hit, Riddle I Dis (based on a sampling of Harriott's huge 1960s hit Solomon), a staple at every 1970s 'session', was guaranteed to revive any waning vibe and pack any dance floor. No official document confirms my personal memory of him doing a stint with song and dance group The Fabulous Flames, which included Ossie D, Kirk Salmon, Lloyd Lovindeer and Glen Ricks.

No matter whose turn it is now; regardless of who is in and who is out, Jamaica can't afford to purchase any JEEPs, and 'tax reform' must mean increased taxes collected without increased taxation. As the USA is painfully discovering, tax cuts can't be funded by budget deficits, and budget deficits aren't closed by cutting taxes. First, budget deficits must be closed. Then, we can contemplate tax cuts for large corporations.

Everybody must contribute their fair share, including tourism; big business; and, most important, political leaders. Now that terminating tourism tax concessions is squarely and properly tabled, will political leaders accept they must set the example? We now have 63 MPs. Surely they can't seriously vote themselves huge personal tax waivers on expensive imported motor vehicles? At least tourism contributes significantly to GDP. Which MP's contribution qualifies him/her for greater tax concessions than tourism? Maybe, if MPs paid full import duties on new cars, we'd be able to do more for the elderly (real pensions? free medication?). Or offer scholarships to tertiary students. Something. Anything.

Round and round it goes

"It's a slow day in a little Greek village. The rain is beating down. The streets are deserted. Times are tough. Everybody's in debt. Everybody lives on credit.

On this day, a rich German tourist drives through the village. He stops at the local hotel and lays a €100 note on the desk, saying he wants to inspect the rooms upstairs in order to pick one to spend the night. The hotel owner gives him some keys and, as soon as the visitor has walked upstairs, the hotelier grabs the €100 note and runs next door to pay his debt to the butcher.

The butcher takes the €100 note and runs down the street to repay his debt to the pig farmer.

The pig farmer takes the €100 note and heads off to pay his bill at the feed and fuel supplier.

The guy at the Farmers' Co-op takes the €100 note and runs to pay his drinks bill at the tavern.

The publican slips the money to the local prostitute drinking at the bar. She's also been facing hard times and has had to offer him 'services' on credit.

The hotel proprietor then replaces the €100 note on the counter so the rich traveller will suspect nothing. At that moment, the German traveller comes down the stairs, picks up the €100 note; states the rooms aren't satisfactory; pockets the money; and leaves town.

Nobody produced anything. Nobody earned anything. However, the whole village is now debt free and looking to the future with a lot more optimism."

Be careful what you ask. Bailouts are recycled illusions that fail to address the fundamental flaws that put recipients in trouble in the first place and encourage them to return to that said-same condition.

A recent study by two University of Michigan professors found that US banks, instead of significantly increasing lending after being bailed out, used taxpayer money to invest in risky securities to profit from short-term price movements. The study found that bailed-out banks increased profits by nearly 10 per cent as a result. Huge bonuses were paid to bank executives. Aluta continua.