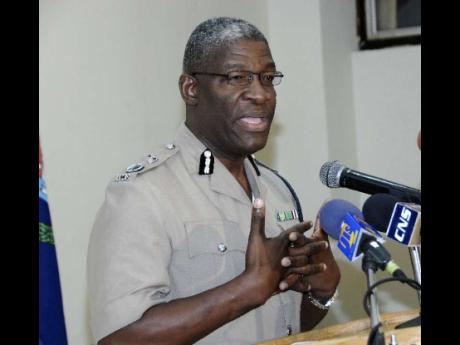 As schoolboys, we used to tease our fellows who were in scouts, cadets, boys' brigade and other uniformed groups as they marched to the shouts of the drill master, because the silly comment was, "Why must you lef (leave) right and tek up wrong?"

So, jokingly, we would remark that we were not interested in becoming soldiers or policemen. Now, despite my attempts to move on to another topic, the police have arrested my attention again and placed it under detention for another week, when I would have preferred to be writing about Boys and Girls' Athletics Championships, the raid of the contractor general on the garage where the JEEP is parked and, of course, the local government elections which are tomorrow.

Given the cast of characters in the debate on Thursday, I would have loved to have gone to sea on the style and substance as the speakers grappled with a recalcitrant and unwieldy English lexicon, which fell rather clumsily from the debaters' tongues. I really don't care who wins at the polls tomorrow, because Chinese fortune cookie, it is a small election.

Still, the police issue is like 'touched' pork, which shows itself on your breath and in your throat, hours after you have eaten it. In the space of three weeks, what looks like an out-of-control set of trigger-happy police have killed a 13-year-old girl, a 74-year-old man, an 84-year-old man, a mother in her 40s, and a brilliant 16-year-old ghetto child who is her mother's insurance policy and who was clearly destined to walk with great strides out of her inner-city shackles and 'mek it' for her family and self. The grief of her mother is unimaginable, because parents are never supposed to bury their children.

Something went horribly wrong because it is reported that she was not firing on the cops. Murmurings on the ground suggested that it was mistaken identity, and a retired police inspector calls it misadventure. Whatever it was, the young miss was taken and the promised adventure of her life ended.

Official reports from the police, which were delayed, indicate that a motor car was involved in robberies in Portmore and its occupants escaped to Kingston where they were caught in a fatal shooting incident with the police. Sixteen-year-old Vanessa Kirkland was killed, and "four other persons (three females and a male were also shot and injured. The other two men escaped. Five of the persons involved in the incident are from addresses in Greenwich Farm, while the other two are from Norman Lane addresses". The police recovered "a Taurus .38 revolver with three live rounds and several spent shells".

The rest of the report unclearly suggests that it was the same car, and the police declare that they found some of the stolen items. I have two questions: Are the police saying that this is unquestionably the same car? And, second, if so, were the occupants attempting to engage them in gunfire or taking any other kind of action to harm the crime fighters? If the answer to the second question is no, the cops breached the use-of-force policy of the constabulary.

Now as my granny would say, "INDECOM again", and once more the police are going to be scrutinised by the Independent Commission of Investigations (INDECOM).

Of course, the intervention of INDECOM is as welcome as a digital prostate examination, because the police organisations have accused its commissioner, Terrence Williams, of 'perceived' bias, and want his barely follicled scalp. Notably, no one has accused him of actual bias. That indictment falls squarely in the camp of Jamaicans for Justice (JFJ).

In a private forum with police personnel recently, they argued that the perception of bias and injustice is actually worse than prejudice itself. The fact is, reality exists only insofar as we perceive it to be so, and I would hasten to tell my friends in the constabulary not just to pause their demand for Williams to step down from his well-paying government job because it appears to the public that they have something to hide.

This comes against the background of 17 members of the police senior khaki-suited ranks being charged under the Corruption Prevention Act. It is not such a big deal that they have been charged because the offence is minor; failing to provide information regarding their assets.

However, one has to ask the question which the public will want to. What is so difficult about doing an audit of one's personal finances and assets and revealing them to the Government? After all, how much money and how many houses and cars can one public servant have, even though superintendents and other senior officers make more money legally than their minister of government. Now you perhaps understand why the former prime minister might not have been willing to pay them the additional seven per cent increase a few years ago.

Nevertheless, if there was such unwillingness to reveal information which is not incriminating, what would the public think they wouldn't do to obscure real crimes? It is an unfortunate occurrence, and if I were in the position of their superiors, I would treat them like the high-school students who neglected to do their homework and have them write 1,000 times, "I must always submit my information under the act as required by law."

True, there is the perception of bias, because two weeks ago Williams sat on a podium with JFJ, which has been combative and is seen as wearing the police's scarlet letter, to the chagrin of the police groups. Clearly, bias is a communicable disease, because apparently Williams caught it from them and, as a result, he is unable to do his work. Yes, we understand the cliche in law about justice not just being done but appearing to be done. But is it merely the appearance of bias that the police are worried about?

It honestly cannot be, because the question would be, "To whom would Williams appear to be biased?" Certainly the public could form the impression that he is consorting with the enemies of the constabulary, and it is a matter of show me your company and I tell you who you are. But the public does not try cases, do we? And it is the same police and others who will quickly argue that appearances are deceptive and the matters relating to the police should be allowed due process, 'yaadda, yadda, yadda'. In other words, procedure always trumps public opinion.

So then, are there clear operational guidelines which would circumscribe the conduct of INDECOM's investigations? What are the possible negative effects if, as the police are saying, he is actually biased? And if so, how is this bias likely to be manifested? Will Williams deliberately stifle evidence, overlook facts or create false data in order to incriminate police personnel? If so, that is a major issue bordering on a propensity to commit criminal acts. Operational bias by this lawyer with more than 20 years at the Bar would not merely be prejudicial. It would be criminal.

Thus, let us have a commitment to the truth. It is irrelevant what official reports say if the public knows what the truth is. As I said last week, there is only one way to do right. So let the police and INDECOM march to the same beat and 'left right but keep right'.

Dr Orville Taylor is a senior lecturer in sociology at the UWI and a radio talk-show host. Email feedback to columns@gleanerjm.com and tayloronblackline@hotmail.com