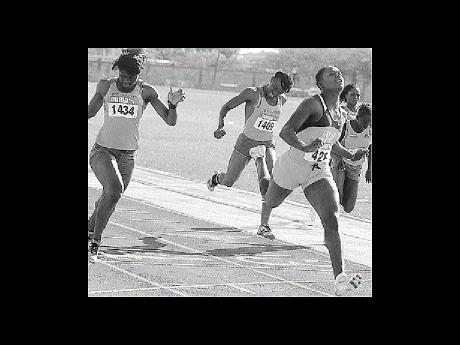 Dr Lascelve 'Muggy' Graham's 'The numbers game in high school sports', which appeared in The Gleaner of Saturday, March 17, 2010, argues against the 'importation' of athletes into high school. There are some unstated assumptions which underlie this argument.

Dr Graham constructs a straw man and then proceeds to destroy it. He tries to distinguish between high school and other levels of the educational system. This is an artificial distinction which is not always appropriate. Principles used at the tertiary level are also of relevance at the secondary level.

The purpose of a school is to give the best possible education to its students. The selection of the student body is itself an important tool in fulfilling this objective. This is so because the learning process is not simply from teacher to individual student, but includes students learning from each other.

Obviously, the scholastic ability of each student creates an externality for all other students. Educators discuss the pros and cons of grouping students by academic ability.

One argument is that putting together all the high-ability students allows each to progress faster and, therefore, do more in a limited time. The less-endowed students, this argument purports, would be able to move at a pace appropriate to their level and, therefore, increase their learning outcomes.

Another school of thought is that mixing students of different academic abilities allows the less able to achieve more because they are carried by the momentum of the more able.

There obviously is some truth to both arguments.

Within high schools, different approaches are used. In some, pupils are streamed by ability, and in others the streaming is alphabetic and, therefore, random with respect to ability. Assigning children to high schools purely on the basis of an examination result (a proxy for academic ability) is an application of the view that students should be grouped by academic ability.

The most extreme form of sorting by ability would be to have the GSAT results entered into a spreadsheet in descending order of performance and allocation to schools made on the basis of the following rule: the top 200 students would be assigned to the school ranked No. 1, the next 200 highest performers assigned to the school ranked No. 2, and so on.

We do not practise such a system; we allow some amount of discretion. Students and parents/guardians are allowed to exercise some amount of preference. There are many different factors which enter into these preferences - location, programmes offered, tradition (where parents went to school), etc. Some countries practise zoning, i.e., they allocate their students to public schools on the basis of where the child lives; there is no attempt to use academic ability.

Schools, as part of the educational process, would like to expose their students to diversity, since students learn from their peers. Having all the students coming from the same neighbourhood reduces social diversity, since people of similar classes tend to live together.

Our system of allowing students to choose schools outside their neighbourhoods is less restrictive in ensuring social diversity than school zoning. However, the high correlation between class background of parents and educational attainment of students, along with allocation according to GSAT results, leads to a concentration of upper middle-class students in the highest-performing high schools.

Diversity is required not only in terms of social background but also in other areas. This helps students to prepare for life. Navigation through life is not purely about academic attainment, as important as this might be. In other countries, the issue of race becomes important in selecting the student body, even if it means that a higher-achieving student of one race must give way to a lower-achieving student of another.

This issue is not only about the two students involved. The entire student body needs to learn to live in a world with multiple races, and where better to learn to do this than in school? The rest of the school benefits educationally from having minorities among them. Of course, the denied majority student feels aggrieved.

The issue for social planners is whether the entire student body is made better or worse off by such decisions.

The same argument can be made with the inclusion of persons who are outstanding in a field other than academics. Does the student body benefit from having people who are good at acting, singing or sports among them?

A student may wish to move from one school to another because one school is better able to meet his/her needs. These needs could be academic (some environments are better for an individual student than another) or non-academic (one school might have a tennis programme while another does not, or a youngster might want to be in a school with a good music programme - there are few high schools which would allow a young boy to experience the musical experience of the Kingston College Chapel Choir).

These are legitimate reasons why a student might want to change school. According to Dr Graham, these things should not matter, and we should resort to the spreadsheet with its univariable decision rule.

Should a school not be allowed any discretion over which student it admits? If there are three children in a family attending a particular school, and a fourth is assigned elsewhere, should the principal of the first school not take this into consideration as to whether or not to admit the fourth child?

Dr Graham suggests that disturbing the academic pecking order is to deny someone an education in that institution. This has to be balanced against the additional resources which the school might be able to garner and, therefore, increase its ability to educate more students in the future.

College sports bring in vast amounts of resources to some foreign universities, which allow them to be able to hire highly-paid world-renowned academics/scientists and to offer scholarships to many needy students. In some instances, a promising student athlete is given preference over another student with better scores. There seems to be nothing immoral here. There are X places to be allocated to Y students, and some allocation rule is required. Some amount of discretion may lead to a better outcome than a strict rule, because it is impossible to write rules which lead to the perfect social outcome.

The question of morality should not be forgotten. While it is true that a person who is allowed entry into a particular school because of some special ability will enhance the educational experience for the rest of the school population, care must be taken not to exploit such a person. That person is deserving of an education also.

A reasonable expectation should be that such a student will leave that school with an education. To simply use a child on the football team, with no concern for his education, would be exploitation.

A small faction of special skilled persons within a school population can enhance the education of all and enhance the education of future generations. These skills might not all happen to appear based on scholastic outcomes. High schools must seek to educate those under their charge as best as possible. There is no compelling reason why admission should be based solely on examination results at age 12.

Peter-John Gordon is lecturer in the Department of Economics, UWI. Email feedback to columns@gleanerjm.com and pjmgordon@hotmail.com.