The secret of the inner city - 'See and blind! Hear and deaf!' 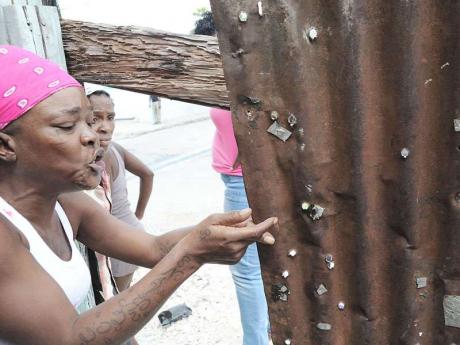 A resident of Denham Town, west Kingston, points out bullet holes on a fence on Charles Street after a police shooting in February. - File 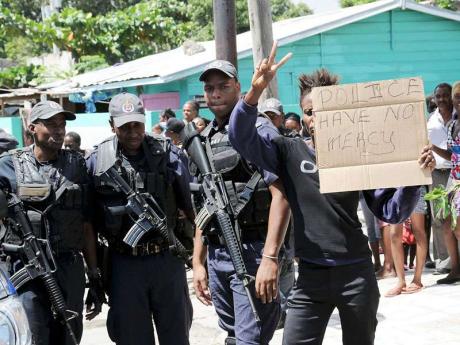 A resident protests the police killing of six people in Denham Town earlier this year. - File
1
2

For some senior police personnel who face the heat daily, as well as high-profile sociologists who study cause and effect, crime fighters are moving in the right direction, but the deeply entrenched anti-informer culture reinforces a high level of distrust between the lawmen and the people.

The people will not pass information to the police for fear that their names will be linked to the investigations, hence putting themselves and their families at risk.

A stiff and untenable culture of silence emanates and this is not uprooted easily. This culture makes a suspect of everyone living in some communities. By appearing uncooperative with the rule of the State, yet acquiescing to the dictates of the don, residents become party to criminal activities.

The same is true of police personnel who witness corruption and murder within their ranks and choose to remain silent. This culture of complicity - see and blind hear and deaf - is played out in inner cities. It is also evident as an unwritten rule in squads within the police force. Criminality and corruption thrive.

Head of Crime Stop, Prudence Gentles, is of the view that while public interaction with her organisation has increased, the 'informer fe dead' culture is alive and kicking. "Crime Stop has benefited from increased public assistance as you can be an informer on the down low," she said.

Gentles, however, suggests that the crawling justice system continues to nurture the culture. "The chance of a witness being identified in court cases that are dragged out for years is high. Until there is improvement in this area, we will not benefit from an improved police force," she said.

A young woman, who declared that she has nothing to do with criminality in the south St Andrew community where she lives, vowed that she would not tattle on anyone as the same policemen could not be relied on to hold their tongues. "A whole heap of people dead this way," she charged.

Senior Superintendent of Police Terrence Bent concedes that lingering distrust and apprehension among inner-city residents are among the greatest impediments to improved relations between the citizenry and the police.

As one of the policemen who have been caught in the line of fire (figuratively and metaphorically) between police and citizens, Bent would be painfully aware of the challenges that confront the police as well as citizens.

He was the man saddled with responsibility for the challenging and tricky West Kingston Division, in the aftermath of the May 2010 Tivoli incursion.

Dr Orville Taylor agrees that there are signs that the entrenched anti-informer culture is being rooted out, but there is some way to go.

"The official ideology of the police is now community policing, which is not simply about public relations; it has to be about a totally new ethos where there is a strong recognition that it is impossible to police a civilian society without having the high levels of cooperation with civil society," he said.

"The thrust to community policing is in the right direction, but it will take time to root out the entrenchment of the culture," he stressed.

However, Taylor suggests that the lingering effects of the Suppression of Crime Act, in which the police were accorded with added powers to enter premises without a search warrant, are alive and well. The law was enacted in the 1970s by the Michael Manley administration to combat rising crime of the times and was repealed in the 1990s by the P.J. Patterson administration.

For Taylor, the deep-seated results will be difficult to eradicate.

But reputed social worker and member of the Peace Management Initiative Horace Levy is of the view that the challenges of anti-informer culture and police excesses are two entirely different issues.

Levy concedes that while there have been some improvements, the anti-informer culture continues to affect the passage of communication between police and citizenry. "People are more open, but it (police excesses) is separate and distinct ... . There is no question that people have covered for dons, but those are quite different from the many cases of police shooting people without justification."

Citing the Norman Road shooting in which 16-year-old Vanessa Kirkland was killed, Levy said, "You don't kill people for robbery; it is outrageous and people are angry. This is just one of too many cases that many poor people have."

He was critical of Police Commissioner Owen Ellington for what he described as "encouraging the issue".

While discordance prevails, human-rights groups and angry individuals from within and without troubled communities add their voices to the din.

But for both the senior policeman and the sociologist, there appears to be some amount of harmony in the sentiments being expressed.

"There have been some improvements but there is still that level of uncertainty as to the state's true capacity to protect individuals from criminals and that is largely because of ignorance," Bent told The Sunday Gleaner.

"Most persons are not fully aware that the level of protection granted by the Witness Protection Programme and in some cases, these persons do not fall within the category of persons who can be protected," Bent stressed.

He sought to produce testimony to the fact that things are changing for the better even when the people howl their displeasure at perceived police excesses. "If a person is on the roadway and see a gang with guns and they advise the police, they would not fall within the group who would be facilitated by the programme."