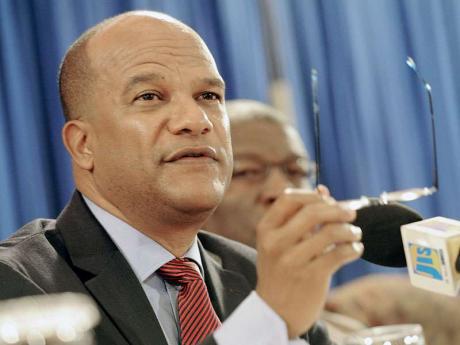 There are indications that the plaintive complaint of Minister of National Security Peter Bunting that he should not be made to shoulder the blame for spiralling crime levels will not be enough to prevent interest and advocacy groups from tackling the rookie minister this week.

The province of the Ministry of National Security where Bunting works is expected to be the scene of a peaceful protest on Tuesday by vocal human-rights group Jamaicans for Justice and other civic organisations.

"In light of the recent increase in police killings, Jamaicans for Justice, supported by other civil-society groups and indivi-duals, will be having a peaceful stand for improved policing," declared a statement that was dispatched by well-known agitator, Carole Narcisse.

The statement divulged that the action is expected to:

But even before the civic groups had signalled that they would be taking action at Bunting's office, the minister had been soaking up the pressure for seemingly sidestepping his responsibility.

He has been reprimanded for seemingly passing the buck on the country's crime wave that has got worse since he assumed the portfolio at the start of the year.

At a Private Sector Organisation of Jamaica (PSOJ) breakfast last Tuesday, Bunting griped about who gets the credit when there is a reduction in crime and who gets the condemnation when crime increases.

He lamented that the plaudits go to the commissioner of police when crime dips but when there is a spike in crime the blame is laid squarely at the feet of the minister with portfolio responsibility for national security.

"One thing I have learned, though, even though there was this amendment that said (the) commissioner (is) responsible for operation and (the) minister (is) responsible for policy, when crime went down last year, the commissioner got man of the year. When crime went up at the beginning of this year, all the editorials were: 'what is the minister doing?'," Bunting bemoaned.

He continued: "So, apparently, it only works when crime is going down, but when it is going up, then the minister gets held responsible, which is fine."

Delroy Chuck, the Opposition spokesman on national security and justice, dragged Bunting over the coals for his gripe about who should get the glory or the blame for the country's long-standing crime problem.

"Clearly out of place," was the characterisation of former Justice Minister Delroy Chuck in describing Bunting's complaint.

"The minister is in charge. The buck stops with the minister," he added.

The former top cop said "all citizens of Jamaica have a role to play" in the fight against crime.

"It's neither for the commissioner nor the minister. I wouldn't put the blame at the feet of either of them. The buck stops with all of us," said Thomas.

In addition to his controversial remarks about who should get the glory or the blame for crime, Bunting said his posture as national security minister is to focus on policy initiatives. "I really very much intend to focus on policy, leave operations to the commissioner of police ... . My job is to get the right resources, the right legislation, the right policies, the right initiatives and then to leave the operational level initiatives to the front line managers and not just get out of their hair but remove as much of the barriers to their being as effective as they can," he said.