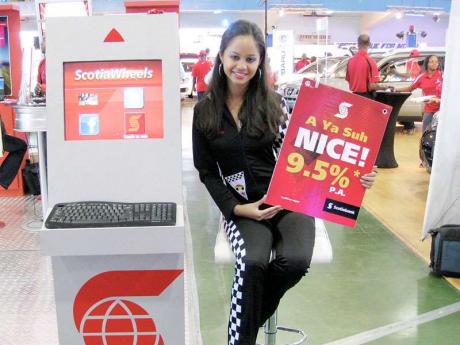 Scotiabank dipped into dancehall slang to promote its special interest rate at the 2012 ADA Motor Show. - Photo by Mel Cooke 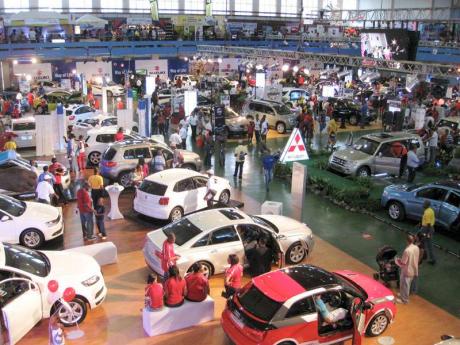 The doors opened with nary a squeak - in fact, without a sound - as new car admirers and seekers took the opportunity to sit in the cars of their dreams at the National Arena, Arthur Wint Drive, St Andrew, yesterday.

If mute ingress was not enough proof that it was new cars all the way at the 2012 Automobile Dealers Association (ADA) Motor Show, then the sound of egress was adequate supplementary evidence. Doors closed with a solid 'thunk', the tell-tale used-car hollowness and even rattle absent.

After a low-keyed opening day turnout on Friday, which ADA chairman Kent LaCroix attributed mainly to heavy rain in the Corporate Area, yesterday's mid-afternoon turnout was noticeably higher. An even higher attendance is expected today, traditionally a family day.

Sophia Clemetson inhaled the new car smell in a Toyota Camry as if it was the elixir of eternal trouble-free driving life. A self-described "determinedly single young woman", she told The Sunday Gleaner that she was "looking for later".

"I can't buy now, but in about a year I will be seriously looking and I don't think the choices are going to change much. I have been checking out cars this size, because when you buy a new car it is not something you going to change tomorrow and I don't plan to be single forever," she said.

'Bredrens' Jonathon and Wayne sat together in a drop-top Mercedes-Benz, mentally cruising the highway as they stared through the windscreen at another car on display and one of the Arena's walls. "Nah man, cyaa buy this, but we jus' a check out. When nex' we can sit in a machine like this?" Wayne said when The Sunday Gleaner asked the young men about purchase possibilities.

On Friday evening KIG had officially introduced the 2012 Subaru XV and Ford Focus. The latest version of the BMW 3-Series was also presented to the public.

The cars gleamed under the near-constant, loving rubs of their attendants, there were announcements of regular giveaways and background music added to the experience. At the core of it all, though, is the business of selling cars and the competition among major financial institutions was genteelly feral, a gauntlet of sales representatives flanking the Arena's entrance.

Major sponsor Scotiabank had a personnel presence on the floor that an occupying army patrolling a site of local resistance would be proud of, their red-top clad representatives present at every turn. One urbane young man introduced The Sunday Gleaner to its 9.5 per cent interest rate, with cash and phone goodies tossed in. He did not waver when he was told that the person he was giving a brochure was on the best interest rate - zero per cent, as in no car loan, gently insisting that something more comfortable may be in the Arena.

Perennial arch-rival National Commercial Bank (NCB) chose to go high for presence, men on stilts framing the doors and bending to distribute pamphlets. First Global and First Caribbean were also at the motor show, RBC joining the interest rate fray with its 9.99 per cent offer.

On the upper level of the Arena businesses related to the business of cars held sway, with products ranging from security to tyres to batteries - and, of course, financing.

Outside the Arena, commercial vehicles had their own place.