Fishermen at risk - 'We have not learnt any lessons' 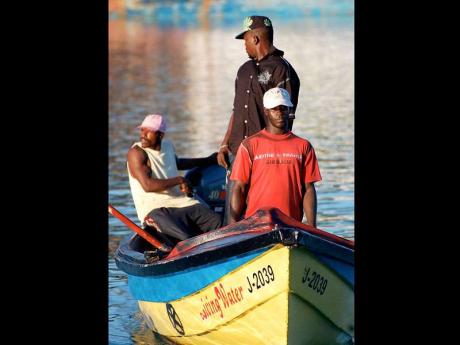 Fishing has become a very dangerous occupation as many fishermen are not equipped with life-saving gear when they go to sea. - File

The recent experience of Jamaican fishermen being stranded when their boat ran out of fuel, which saw one dying at sea and the other two detained in Mexico after being rescued is likely to happen to others because of the disregard most Jamaican fisherfolk have for their personal safety.

"We have not learnt any lessons. It will happen again because what happened to them was so silly. If you are driving from Kingston to Westmoreland and the distance is 50 miles you ought to know how much gas will take you there, but say you run out of gas (at sea), where are the paddles, where are the oars?" Captain Havelon Honeyghan, chairman of the Jamaica Fishermen Co-operative Union Limited, asked in an interview with The Sunday Gleaner.

Two of the men, 26-year-old Joel Lee Smith of Union, St Elizabeth, and 21-year-old Iyun Anthony McFarlane returned home on Saturday, March 17 after almost a month in Mexico, while the boat's captain Wayne 'Medina' Dias reportedly died at sea. Honeyghan believes his experience could have made a difference for the men.

"They are stupid because they said they used a (cigarette) lighter to start a fire to cook. If they had used that same [fire] to light a shirt and wave it, they could have attracted somebody," he charged.

The men's return to Jamaica was hampered by their inability to establish their bona fide firstly as Jamaicans and also as licensed fishermen, the latter could have landed them in jail upon their return, according to the veteran fisherman.

Honeyghan, who was very vocal in calling on the government to do everything to bring the men home, said he did so thinking that the men were, in fact, licensed commercial fishermen. It was later determined that they were operating in breach of local and international fishing regulations.

This he found out while in the process of getting picture identification for the men, a condition of the request from the Mexican authorities. When officials from the Fishermen Co-operative and Fisheries Division of the agriculture ministry tried to check on the identification of one of the men, who claimed to have had a fisherman's ID some time in the distant past, they ran into a hurdle.

The records showed three men having the same name, two of whom also had the exact birth date. The matter was further compounded when the mother of the stranded fisherman in question rejected the photo presented, declaring that it was not her son. These were just of the behind-the-scenes problem, unbeknownst to the general public which, in concert with Honeyghan and other groups, was pressuring the ministries of foreign affairs and agriculture and fisheries to move decisively and quickly to bring the men home.

"If those men had proper IDs on their person, once they were picked up, they would have been identified as Jamaicans, and it could have eased a lot of the problems. They could have been home much earlier," stated Honeyghan.

The problem, he believes, lies not only with fishermen, but also the authorities who, over the years, have failed to enforce regulations which dictate the minimum safety measures to be employed before setting out to sea.

For those interested in escaping the fate of Smith and McFarlane, he had this advice: "Take your fisherman's ID to sea. Make a photocopy and leave at home so that in the event you are picked up, it can establish who you are and where you are from."

Insisting that all the regulations are there and need only to be enforced, he pointed to the demand by the European Union (EU) that all local boats engaged in conch fishing for export to its member states must be fitted with a global-positioning device. This is not only a safety requirement, but also affords for traceability in establishing that the catch is harvested in accordance with the terms of the licence.

The section of the Fishing Industry Act (1976) which speaks to the identification of licensed fishermen states that "Every licensed fisherman (other than the holder of a temporary licence issued pursuant to subsection (3) of section 5) shall carry upon his person such identification card as may be prescribed at all times while, using any of the methods specified in the Schedule, he is fishing in Jamaica or, if he is a citizen of Jamaica, within such waters outside Jamaica as may be prescribed pursuant to section 3."

Still, fishermen continue to breach with impunity this regulation for which the penalty is less than the cost of six sweets.

"Any person who contravenes the provisions of this section shall be guilty of an offence and liable on summary conviction before a Resident Magistrate to a fine not exceeding twenty dollars and, in default of payment thereof, to imprisonment for a term not exceeding one month."

Whatever the reason for disregarding the law, Honeyghan is concerned that fishermen, in the absence of strong enforcement, will continue to put themselves at risk. Declaring that no individual is mandated by law to see that fishermen adhere to the law, he explained that if the Marine Police or Jamaica Defence Force Coast Guard stops a boat in a routine check and find that either the vessel or its occupant is not up to the minimum safety requirement, the vessel can be forced to return to land.

However, Honeyghan is convinced that more Jamaican fisherfolk will suffer the fate of Dias.

"It will happen again, because the guys who are going out there, they are careless as hell."