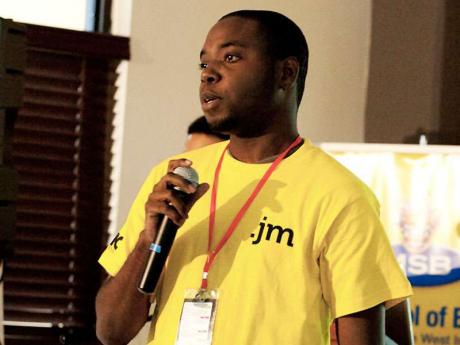 The 2010 Churches Co-operative Credit Union (CCCU) Entrepreneurs' Award winner, Wayne Jones Jr, has continued to blaze an impressive trail with his most recent triumph, ably leading a team that emerged as a top-three finisher in the Jamaica leg of the 2012 Caribbean Open Data Conference Software Developers Competition.

The competition is the only regional software contest which focuses exclusively on using information technology solutions to address social issues. In a high-stakes challenge, contestants had just 24 hours to develop their software solutions and Jones took second prize.

This feat was another strong performance from the young businessman, who copped the CCCU Entrepreneurs' Award in 2010, shortly after graduating from the University of Technology.

The Entrepreneurs' Awards pro-gramme was established in 2006 and serves as a critical part of CCCU's strategy to promote the development of local industries. Under the programme, final-year students at tertiary institutions submit business plans for a small enterprise for a chance to win $300,000 in start-up capital. In the six years the programme has disbursed more than $1.3 million in start-up funding to young entrepreneurs eager to start their businesses upon graduation.

Jones, who submitted the winning proposal in the 2010 programme, went on to establish Hybrid Technology Solutions, a firm which specialises in website and software development, online marketing, and graphic design.

"Wayne's continuing success story is an ideal example of what CCCU is seeking to achieve with our Entrepreneurs' Awards; the unearthing of local business people who have the vision to conceive a business idea and the discipline to take that idea from concept to reality," said Sophia Richardson, manager, micro and small business loans.

"At Churches Credit Union, we see entrepreneurship as the driving force of economic development, and we will continue to identify young business persons and provide them with the financial support and mentoring that is necessary to help them to establish successful enterprises," she added.

In the last six years, CCCU's Entrepreneurs' Awards grants have been used to set up businesses in various sectors. Among the local companies that owe their start to CCCU's Entrepreneurs' Awards programme are the highly successful Dixon's Creations, a clothing manufacturing business, and Trelawny Delight, a yam agro-processing enterprise that has initiated talks of exporting their products overseas.

The Caribbean Open Data Conference and Software Developers Competition was established to provide a forum for the development of IT solutions to address social and economic challenges being faced by governments, non-governmental organisations and civil society. In addition to the event which was held in Jamaica, conferences have also been staged in Trinidad and the Dominican Republic this year.