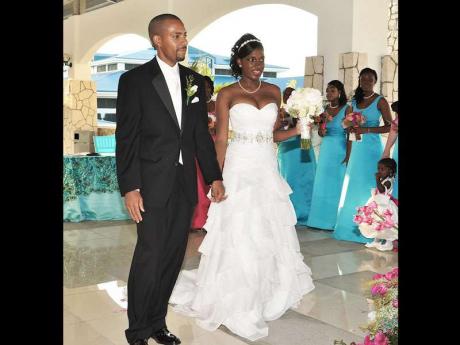 Officiated by Baptist ministers the Reverend Everton Jackson and Karl Johnson, the ceremony for the two soulmates, who met four years ago while at respective universities, was witnessed by some 120 family members and friends.

It was the beauty of the sky blue, lively and crisp colour theme selected by the wedding team and the happiness that glowed in the eyes of this couple that made this day spectacular. Blue and magenta, mixed with shades of pink enticed the eyes and warmed the souls.

The youth factor was evident at this wedding and except for the seasoned decorator Charmaine Phang, Christopher and Jodi Gordon used the services of their counterparts to pull their special day together.

At the close of a beautiful evening, Joe and Rose Hylton, parents of the bride, were satisfied they had done a fantastic job with their daughter's transition into womanhood, and Lexton and Esther Gordon accepted the fact that a man shall leave his parents and cleave to his wife and the two shall become one flesh.

"My only request is that I want many grand-children," was Lexton Gordon's only demand.