DOCTOR'S ADVICE - His massage has made him frightened 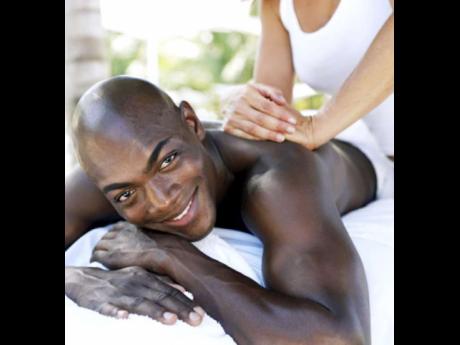 The girl there was very nice, and she gave me what was described on the price list as 'hand relief'. She also allowed me to touch her breasts. Afterwards, I felt less tense. But then I got to thinking, Doc. That young lady must be dealing with at least a dozen male clients per day. So there must be a chance that she has caught something from one of them. So could she have given me any form of venereal disease? And is there any danger that I could pass it on to my  wife when I go home to Jamaica?

A. It is understandable that you feel so frustrated after a long time away from your wife. I hope you get home to her real soon. Now, that massage parlour woman gave you what is termed a hand job. I can reassure you that the chances of catching a sexually transmitted infection (STI) from that particular activity are almost nil.

Technically, it would be just about possible for a woman to have a syphilitic lesion on her fingers, and for the germs inside it to be transferred to the man's organ. But the odds against such a thing happening are many millions to one. So I am sure you are OK.

However, I would NOT advise you to go back to the massage parlour. The reason why I say that is these establishments generally offer 'further services' if you pay them a little extra money. I presume that you have already paid a little bit extra in order to get the young lady to let you feel her breasts.

If you went back, it is probable that you would be offered further 'items' from the parlour's price list. An obvious one would be oral sex, which DOES carry a moderate risk of passing on STIs. And probably you would also be given the option of FULL sex at a higher price. That could very definitely give you an STI.

One has to feel sorry for girls who work in these establishments. But when they 'service' so many guys in a day, this means that they could well be carrying an STI. So summing up, at the moment you are OK healthwise. But I would advise you NOT to go back to the massage girl, or to have sexual activity with any other person until such time as your wife welcomes you back to Jamaica.

Q I am a woman who needs your help because I don't know who else to speak to. I have been married since my teens and in all that time my husband has suffered from premature ejaculation (PE). I am literally begging him to get help, but he will not. He goes to doctors for everything else EXCEPT this problem.

I don't know how much I can take of the situation. Can you imagine how frustrating it is, Doc? I am beginning to resent him now. I have never had another man in my life. And I know I love him and want to give him my all. He gets quite jealous and insecure at times and accuses me of cheating. God knows I have thought of it, but I would not do it because I believe in great principles. When I talk to him about getting some help for the PE, he says I am becoming a nagging person. But all I want is some good love from him.

A. Of course you do. I congratulate you on staying with this man when he has refused to get anything done about his PE. I suspect that his jealousy and insecurity are caused by the fact that he knows that his PE is so severe that he is not much good in bed.

I have often written about PE in this column. There are several good ways of treating it, including the Masters-Johnson 'squeeze' technique, and the medication called anafranil in a dose of 25mg or 50mg. However, if you husband will not cooperate, it is difficult to see what you can do. You can hardly FORCE the Masters-Johnson squeeze grip on him. And you cannot start putting anafranil in his coffee.

My best advice to you is that when you are in bed, you could try sitting in front of him and giving him a little 'hand massage'. When he gets near to orgasm, you could tell him that you would like to give him a gentle squeeze. The method of doing this is explained on many websites.

If you do it right, he will temporarily lose his need to orgasm. And with luck, he may perhaps realise that this is a good thing! After that, you could do the same thing regularly. The idea is to retrain him so that he can last much longer. I wish you well.

Q. I am a man of 27 and suddenly I have noticed that my spermatic fluid has turned BROWN! My girlfriend says it is nothing to worry about, but I am not so sure. Do you think it could harm her, Doc?

A. No, it cannot harm HER. But there is a real possibility that your own health is at serious risk. You see, brown-coloured sex fluid usually indicates BLEEDING somewhere in the guy's 'pipes'. The bleeding could be around the testicle, but it might be elsewhere. So what you should do now is to see a doc as  soon as possible. Ask him to examine your testicles, and the adjacent piping.

I hope that he will also fix up an ultrasound examination. This is painless, but gives a very good picture, looking a little like an X-ray, of the testicular area. When this has been done, the doctor will be able to tell you whether there is anything serious wrong. I hope there isn't.

Q. My husband and I are both real passionate people. But I have just learned that I am pregnant for the very first time. So is it OK for us to continue having intercourse now that I am with child? If not, we would both miss it very much.

A. Generally speaking, it is quite OK to continue having sex during pregnancy provided that your midwife or doctor does not have any medical objection. But during the later months of the pregnancy, it is a good idea to take things rather easily, and avoid real energetic or acrobatic forms of lovemaking.

Q/ Could an obeah man 'block' the action of antibiotics, Doc?

A. No, that would not be possible. Antibiotics will do their work, whatever an obeah man does.

Send comments/questions to editor@gleanerjm.com and read more Doctor's Advice in The Saturday Gleaner.