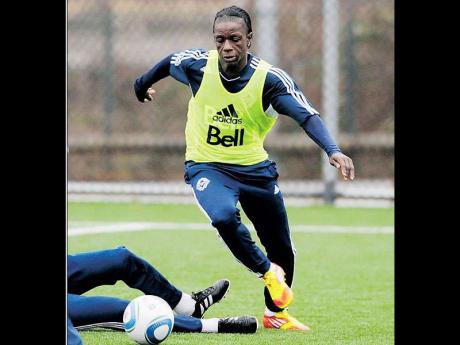 Promising footballers leaving Jamaica's high schools are being warned against signing contracts to play for pay at local clubs if they hope to earn scholarships to United States colleges.

The rising profile of Jamaica's football in the United States (US), underlined by the recent selection of Darren Mattocks, second overall in the SuperDraft of North America's top professional competition, is drawing scrutiny on those looking to enter American schools.

"Right now, Jamaican players are in high demand in the US college system," said Jamaican Hylton Dayes, football coach at the University of Cincinnati.

"I think you're going to see the NCAA (National Collegiate Athletic Association) shine a little brighter light on the recruiting of Jamaicans. It doesn't mean there's anything wrong. It's just that the volume of recruiting has increased."

The NCAA governs sports involving top US universities. It ensures student athletes retain academic and amateur eligibility. The prominence of Jamaican footballers has not escaped its attention.

"We are aware of the increase of the number of Jamaican players to come to the United States in the last five years," said Mike DeCesare, associate director of amateurism certification at the NCAA Eligibility Center.

Professionals, meaning footballers contracted to play for money or hire agents to represent them, are not allowed to compete in NCAA events. Violations can lead to crippling penalties, including banning players and schools.

Jamaica is ranked in the top 10 among foreign countries sending footballers to US colleges. In 2011-12 some 120 Jamaican prospects - male and female - registered at the Eligibility Center, which checks if they meet NCAA standards. Many college-age players participate in Jamaica's competitions, including the premier league, and US colleges are still burdened by misconceptions.

"They are of the view that Jamaican players who play in the premier league are all professionals and that is not true," explained Ian Kemble, competitions officer at the Jamaica Football Federation (JFF), where contracts for professionals are lodged.

Dayes believes players have little to fear if they are careful when entering deals with local clubs.

"As long as they don't sign any professional contract I don't think there will be a (NCAA) violation," he said.

Players who don't lodge contracts with the JFF are deemed amateurs, according to Kemble. However, checks indicate that some have signed club contracts that end their eligibility for college scholarships then later regret it.

Although the system has been tightened, it's still open to corruption. Some local club representatives have allegedly manipulated unsuspecting players to accept compensation that would make them ineligible for US college scholarships. One source, a former top-level local coach who did not want to be identified, cited examples where players were signed to an amateur contract. Then, after an overseas club enquired about buying a player, the contract was "backdated and changed" to a professional contract to facilitate the sale and ensure the local club would receive maximum financial compensation for the player.

To avoid suspicion by colleges, and eliminate a paper trail, the "amateur" player was paid in cash.

The reverse also applies, according to the unnamed source. "The club will switch the contract (of a pro) back to amateur" if a college wants him and there are no professional options available, he said.

"It's a racket," the source added.

Rumours of corruption have spread, but to date no player, college or club has been punished, according to Jamaican authorities and the NCAA.

"I hear about it," said Kemble. "but I don't have any facts to substantiate it."

The promise of reward on the field - including titles and individual riches - fuels the shady deals off it. Some recruiters will gamble, deliberately taking a player who has violated his amateur status.

"With what's at stake, don't put that past them," said one US college coach referring to some colleagues.

Many players have become trapped in a non-reversible situation. A premier league star who has represented Jamaica at youth and senior levels said he would accept a college scholarship if recent tryouts with pro clubs in Europe failed.

"Really?!" said the astonished player after learning he was ineligible since hiring an agent.

"If you sign with an agent," said Mosiah Marshall, a Jamaica-based agent, "college is out."

According to DeCesare, not knowing won't spare an athlete from NCAA penalties.

"Ignorance does not equal excuse," he said.

Footballers are allowed to collect a stipend from clubs and retain amateur status. That "baseline amount," cannot exceed "the cost to train and compete."

"The bottom line is he shouldn't be able to profit financially from playing," DeCesare said.

Local footballers who want scholarships, have "had to go through a lot of hoops" to prove their eligibility, explained Marshall.

"The clubs have to demonstrate the player was not really a pro in Jamaica," he said. "That's how they got around it."

Not signing to play for pay is another way.

"Many players ... are registered to play for the club, but don't have a contract," said Marshall.

Those observing the system believe players with intentions to compete in US colleges should do their own homework or risk being denied a higher education.

"There is that danger," said Marshall.

Caution appears to be the watchword for US recruiters. Jamaican footballers may want to follow.

"They need to make sure they're getting good advice," said Dayes.