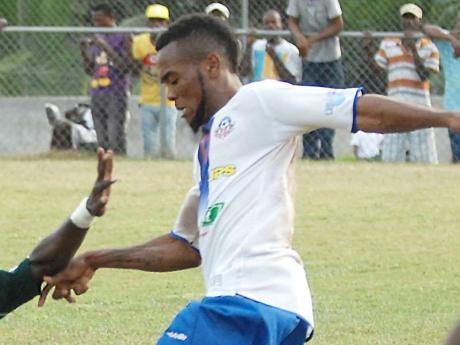 Carlos Barrett ... will be one of the key players for Portmore United. - File

Top-six aspirants Arnett Gardens could do themselves and title hopefuls Boys' Town, Tivoli Gardens, Humble Lion and Waterhouse a huge mathematical favour if they beat runaway leaders Portmore United today with three sets of games to go in this, the third round of the Red Stripe Premier League (RSPL).

The 6 p.m. clash will take place at the Anthony Spaulding Sports Complex.

Should Arnett Gardens win and the other teams follow suit, then Portmore's lead will be cut to seven points above their nearest rivals Boys' Town. Arnett Gardens are in seventh position on 39 points, the same as sixth-place Harbour View, who play relegation-bound Village United today. Both teams are engaged in a battle with Montego Bay United and Sporting Central both on 38 points and in eighth and ninth place respectively for a place in the top six which would guarantee that they avoid the bother of having to fight for Premier League survival.

A win for Portmore United would see them getting a firmer grip on the title and even fully grasp it, but that would depend on other results. Having watched even larger leads slip in the past, Portmore United coach Calvin Lewis is taking a pragmatic approach to the game.

"It will not be an easy game for us to say we can win the title tomorrow," Lewis told The Sunday Gleaner yesterday.

"Too many things will have to happen for that to be the case so we just have to take care of our business ourselves. Arnett want to be in the top six and we want to take total control today so we have to do what we have to do," he added.

Portmore United could go into today's game without two of their top players in Tramaine Stewart currently away in Norway and Alanzo Adlam who is nursing an injury and coach Lewis is anxious to keep everyone healthy.

"I want to keep everyone together and healthy. We need to get nine points in the next eight days. It is a tough period with Arnett tomorrow, Harbour View Wednesday and Village away the following Sunday and even though Village are where they are they beat us 2-0 the last time we played them at their home," Lewis explained.

Lewis sees the three upcoming games as mountains to climb.

"We have three mountains to climb and we have to climb them one mountain at a time so we have to have the legs. We have been doing it all season so there is no reason why we can't continue," he said.

In the two meetings between the teams this season, Arnett Gardens have come out the happier. The 'Junglists', as Arnett Gardens are dubbed, defeated Portmore United 1-0 in their first meeting at the Tony Spaulding Sports Complex and came away from the Ferdie Neita Sports Complex with a creditable 1-1 draw.

While Arnett Gardens have the better record in the head-to-head, Portmore United could bank on their form which has seen them score in all their third-round games. While Adlam and Stewart will be missed, Adoah Nickle, the veteran Roen Nelson, Carlos Barrett and Stephen Williams could lead their attacking charge.

At Collie Smith Drive, home team Boys' Town will face a strong test from Humble Lion who will be aiming to maintain their position in the top six and possibly challenge for the title. Humble Lion showed great character last week to come from a goal down to hand Montego Bay United a rare defeat at the Catherine Hall Sports Complex. Boys' Town on the other hand wasted an excellent opportunity to strengthen their hand as they drew 0-0 with Village United just six days after upstaging Portmore United at Ferdie Neita Park.

Tivoli Gardens are still hanging on to the hope of overhauling Portmore United, and a victory for them over Highgate United now under the guidance of Geoffrey Maxwell would definitely keep them on course especially if Portmore United slip up. Highgate last week put some distance between themselves and Reno in the fight to stay above the relegation zone with a 1-0 win.

Maxwell was once associated with Tivoli Gardens and playing for him is another man, Steve Green, who played for close to two decades at Tivoli before making the move to Highgate. Green will be keen to prove to his community that he still has some football life left in him. Another veteran who could influence the game in Highgate's favour is Roberto Fletcher while Ranique Anderson who left Highgate for Tivoli along with Romeo Parkes will not be easy to get around.