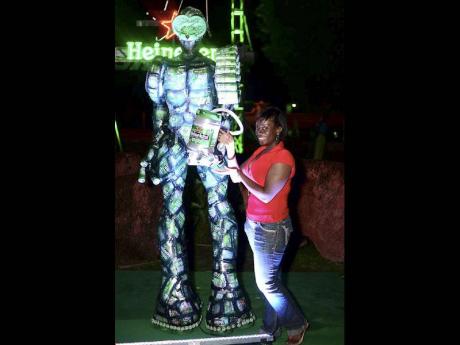 A patron stands beside the nearly eight-foot tall Heineken Robot at the Heineken Inspire launch on Thursday night at Devon House. The robot is made from Heineken cans and kegs and was made by artist Courtney Edwards. The robot is meant to inspire other artists to show how creative they can be while keeping Heineken central to the theme. 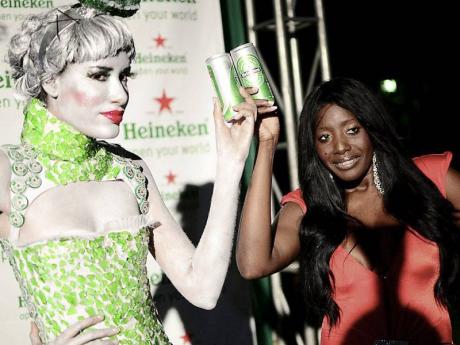 Avant-garde designer of the year Ashley Martin stands next to her awe-inspiring creation 'The Heineken Signature of Class'. The dress is modelled by Jodi Patterson and is made from shards of Heineken bottles and bottle stoppers. The dress is meant to inspire other designers to show how creative they can be while keeping Heineken central to the theme. 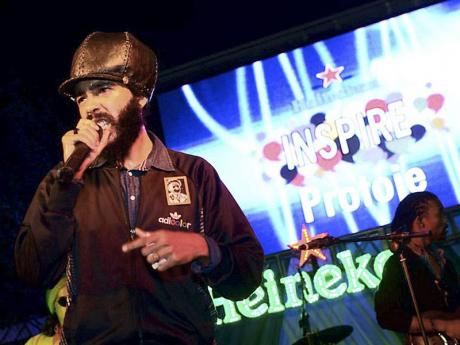 Protoje and the Indiggnation Band perform at the launch of Heineken Inspire at Devon House on Thursday night. - Contributed photos 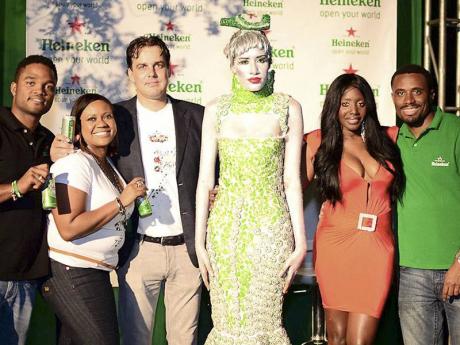 The competition will be spread across four categories and is expected to be the follow-up to Heineken Green Synergy.

The event pulled out hundred of patrons to the lawns of Devon House last Thursday and even though the rain had threatened to put a damper on the spirits of those who attended, the high-tech production, executed by the organisers, managed to pull off a successful launch.

The night's selector DJ Nicco kept the audience engaged by playing popular dancehall selections such as the Overproof rhythm, Mr Vegas' Bruck It Dung and Konshens' Gyal a Bubble.

Patrons also got the opportunity to see examples of some of the artwork already submitted by Inspire hopefuls, as well as a chance to hear inside information from the artists about what inspires their creativity.

The county manager for Heineken, Bob Sprengers, told The Gleaner that Heineken Green Synergy had set the perfect platform to host a new event to showcase Jamaican talent.

The event will feature four categories such as art, fashion, music and human photography and potential competitors can submit their pieces by visiting the Heineken Inspire page at facebook.com/Heineken where they will be required to get as many likes as possible for their pieces after which they will be judged.

There will be a follow-up event in April where a winner will be selected. That winner will receive prizes and also benefit from the opportunity to showcase the winning piece.

"It's the first year of the competition and it feels so good. There is so much creativity and everybody is elated. On the Internet, people are already putting things up. Even for the huge turnout today I'm amazed," Sprengers said.

Fashion designer Ashley Martin was also present at the event, and she premiered a Heineken-inspired dress made from glass and Heineken bottle stoppers.

The dress ended up being the literal show-stopper as photographers at the launch went all out to capture the creatively designed dress.

Reggae artiste Protoje brought the launch to a close by singing popular songs such as Rasta Love and JA.