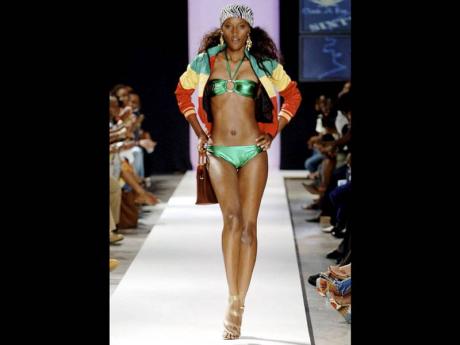 She makes an emphatic rhythmic hip movement at the end of the 100-foot runway, all in perfect sync with the high-energy, fast-paced, multi-layered mélange of music which sends electric excitement through the Caribbean Fashionweek venue. As if instinctively, the audience erupts in loud applause.

This was the opening for the Catch a Fire collection at CFW back in 2005. The show exceeded all expectations as the models confidently commanded the runway in women's wear with a bohemian rasta edge with each piece topping the previous, so much so that when the last look, worn by Jaunel McKenzie, had exited the stage, the audience stood in ovation even before the designer and her carousel of models took to the runway for the customary curtain call.

In 2012, the expectations from fashion devotees will be no less when Cedella Marley, fashion designer, musician and entrepreneur returns to Caribbean Fashionweek in June to debut her new swimwear line, 'High Tide'. Cedella is also likely to showcase the Puma-commissioned Jamaica Olympic gear designed exclusively for Jamaica's Olympians on their way to the London games in August. A line she declares is "Grace Jones meets my dad - very music inspired and a bit retro."

Daughter of reggae legend Bob Marley, Cedella who won four Grammies with the Melody Makers, took her longtime hobby and her genetic creative instincts into a new direction - fashion. Inspired by her father's music, larger than life persona and personal style, Cedella has carved a special place for herself in international fashion and her showcase will highlight the current phase, as well as the depth of her development as a designer.

Cedella, along with the High Tide team, has indicated that they are keen on the opportunity to present the line at CFW. That enthusiasm comes from the timing of the event, which falls in line with the date the collection is due to be unveiled.

While the inspiration and designs of the High Tide collection will be revealed at CFW, the Catch a Fire line has been presented on a global scale, and Cedella and the brand has received extensive coverage from Vogue and Glamour magazines.

The line has been worn by celebrities including singer Gwen Stefani and actress Angela Bassett.

As the event welcomes the return of Cedella Marley along with a stellar line-up of the region's best established and emerging designers, a suite of new features, coupled with the CFW staples — global music superstar performances, the after parties and the party bars, will also be added this year.

The business aspect of the event will also remain a solid element of CFW which is packaged, not only to entertain but to encourage business networking and the development of the regional industry.

Caribbean Fashionweek 2012, which goes from June 7-11, is sponsored by the Caribbean Export Development Agency, the Jamaica Tourist Board, CVM TV, The Courtleigh hotel, and a number of additional partners to be announced in the coming weeks.