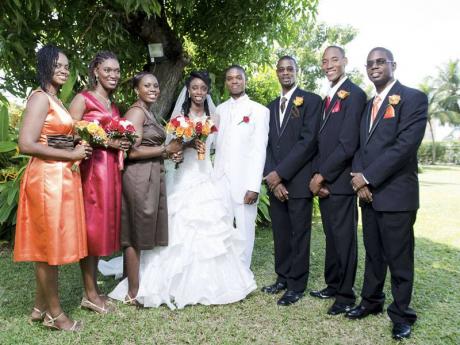 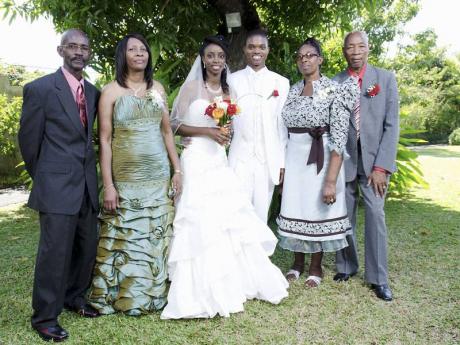 The happy couple with (from left) parents of the bride Gladston and Hedda Simpson, and the groom's parents Judith and Richard Grant. - Contributed photos 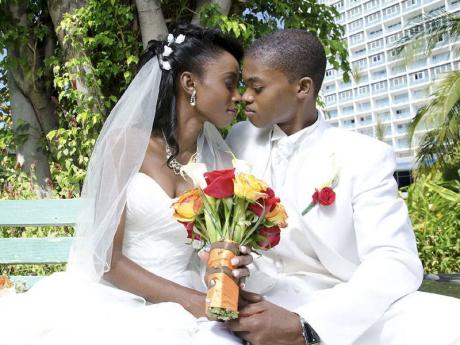 The couple shares an intimate moment on their wedding day at the The Jamaica Pegasus hotel. 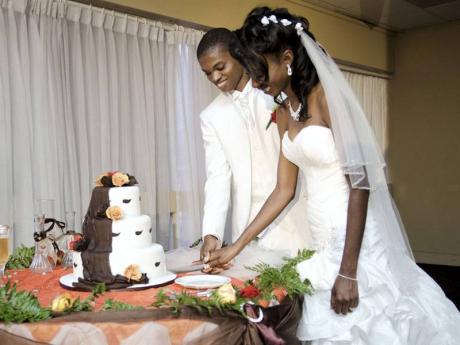 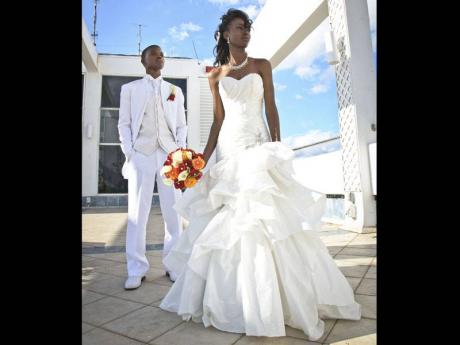 The love story of Sabrina Simpson and Kevern Beeput began two years ago at the Church of the Firstborn Portmore Fellowship. Gradually, this friendship evolved into true love, and the rest is history.

The proposal was a private affair on April 6, 2011 (Sabrina's birthday). Kevern took Sabrina to St Elizabeth where they spent the entire day. All this time, she did not know the question that awaited her. On their return at about 9 p.m, Sabrina started receiving several gifts. The ultimate prize was to be found hidden in the pocket of a handbag. She was speechless when she saw its content. Kevern proposed and after a few tear drops, the forever 'yes' came.

The big day finally arrived on December 3, 2011. The couple decided on The Jamaica Pegasus hotel for the ceremony and reception. Sabrina was her usual radiant self as she glided gracefully up the aisle laid with rose petals to the song Marry Me by Train. Sabrina clutched her bouquet of white calla lilies with red and orange roses in one hand as her father Gladston Simpson escorted her up the isle to meet her groom on the other. Her appearance was complemented by her flawless make-up from Camille Stephenson and her hair styled by Kerry Spencer from Salon Innovations.

The traditional ceremony was conducted by the Reverend Horace Bennett. The couple will forever remember the day because a few light showers caused a change in location. But at the end of the day, everyone was filled with joy and were extremely happy.

The reception followed at the Talk of the Town and featured exquisite décor by Angelina's Wedding Décor. Guests were kept entertained by master of ceremonies Donald Brown with his special blend of humour. The extravagant three-tiered cake was created by Teneisha Williams.

The couple's first dance was to their favourite song, Bubbly by Colbie Caillat. The song perfectly embodied the feelings they had for each other.