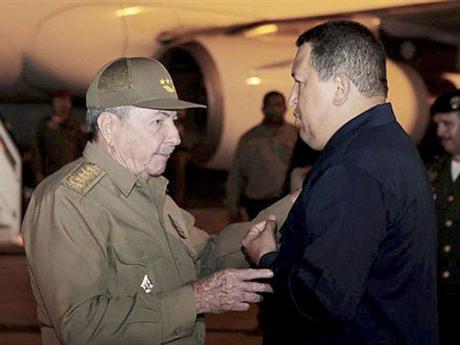 VENEZUELAN PRESIDENT Hugo Chávez said Sunday he has begun radiation therapy in Cuba as part of cancer treatment one month after undergoing an operation that removed a tumour.

Chávez said in a phone call broadcast live on Venezuelan television that he had his first radiation session after he arrived late Saturday. He said that would be the first of five daily treatments and he expects to be back in Venezuela for a three-day break starting Thursday, before returning to Cuba for the next five-day round.

Chávez will be in Cuba at the same time as Pope Benedict XVI, who arrives on the island on Monday after a visit to Mexico. Chávez didn't refer to the pope's visit to Havana, but he did say he views his own Christian faith and prayer as providing strength in his struggle against cancer.

"In reality, part of the treatment is prayer, faith - faith in God, in our God, in our Christ the redeemer," Chávez said. "It's part of my job to assume with rigour this task of fighting to overcome the difficulties, and to continue living."

Chávez has frequently clashed with Roman Catholic leaders in Venezuela, but he has often expressed faith in God and has said he views Jesus' principles as having been essentially socialist.

Chávez chatted with his vice-president, Elias Jaua, in the phone call while the television panned to views of a government-run fish farm. The president said he plans to keep on top of government business as he comes and goes from Cuba for the treatments.

"I'm well, thanks to God," Chávez said, adding that he had been out for a walk in the sun in Havana.

Surgery one month ago

Chávez has been recovering from a Februrary 26 surgery in Havana that he said removed a tumour from the same spot in his pelvic region where another tumour was extracted eight months earlier.

On Saturday night, Chávez was met by Cuban President Raúl Castro as he arrived at Havana's airport. Venezuelan television showed Chávez saluting as he stepped off the plane holding hands with one of his daughters, and then embracing Castro.

In Venezuela, some of Chávez's aides led his supporters in a prayer for his health Sunday morning outside the cathedral in the southwestern city of San Cristobal, and then the crowd began a pilgrimage on foot to another church.