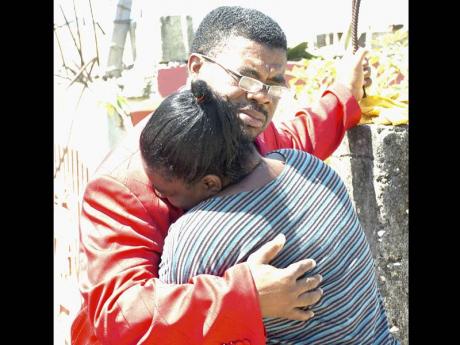 The Reverend Knollis King, pastor of the Rose Heights United Full Gospel Church of God in Montego Bay, receives an embrace from one of his sisters after an attack of vandalism took place at the church early Sunday morning. - Photo by Mark Titus

People's National Party (PNP) candidate for the Montego Bay South East division in St James and pastor of the United Full Gospel Church of God in Montego Bay, Knollis King, is distraught after he woke up to find graffiti plastered on the walls of his church in the community yesterday.

The graffiti, painted in orange and which makes reference to King as the PNP candidate, included sexually explicit remarks about the pastor.

"Whoever did it, for whatever reason, I just ask the Father to give me the strength to say, 'Father, forgive them because they know not what they've done'."

"And it's not going to make me get bitter, but get better," King told The Gleaner.

It is believed that the incident took place between late Saturday night and 6 a.m. on Sunday.

The pastor, who will be challenging incumbent councillor Heroy Clarke of the Opposition Jamaica Labour Party (JLP), refused to speculate whether the derogatory slurs directed at him were politically motivated.

In the meantime, Councillor Clarke has distanced himself from the incident.

"I condemn the incident because the same thing could have happened to me. It is unbecoming of the persons who did it and I am calling for a peaceful election."

King says while he may have detractors, he believes he is the only strong link in the community's chain. He also founded the Rose Heights Covenant of Peace initiative in response to an upsurge in crime in the community over two years ago.

"The church has always been there for this community since 1982. This church serves you whether you're green or you're orange; whether you live up the road or down the road," he stressed.

"An offer was made to me just now to get involved politically, but initially I had no real political ambition," he said.