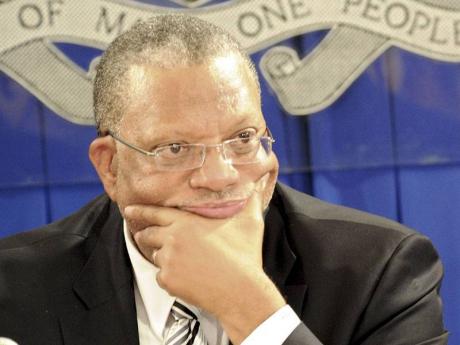 JUST UNDER three months in the job as Minister of Finance, serious questions are being asked about Dr Peter Phillips' ability to keep the ship of the State sailing away from economic ruin.

It was a most untidy way of dealing with the people's business. There should have been no reason for a third supplementary budget, when one considers that Phillips knew of the liabilities, which he excluded from the previous budget.

The explanation offered by the finance minister is that, for the Clarendon Alumina Production, ALCOA, Jamaica's partner in the operations of Jamalco, threatened the Government with default notice.

Phillips also intimated that the International Monetary Fund has advised certain other payments be made in this fiscal year. He said the country will benefit from clearing these arrears this year as fiscal space has been created for future budgets.

The $525.2-billion budget presented less than a month ago has jumped by just over $11.2 billion. The revised budget, which now stands at just more than $536.439 billion, is reflected in the third Supplementary Estimates of Expenditure. Three weeks earlier, Phillips cut the budget by $21.5 billion.

One can argue that Phillips, in his two budgets in one month, was merely seeking to bring order to a worthless budget originally tabled by Audley Shaw last year. Shaw's approach to the national budget was far from inspiring, and Phillips appears to be taking a seat just beside him at the back of the class.

But maybe, just maybe, we are being a bit harsh on the new finance minister. Perhaps it is the technical team at the finance ministry that should take the blame for the sloppy budget. Maybe it is a bit too early to judge Phillips, bearing in mind that he is yet to present a budget of his own.

The country will see the real Phillips next month when he tables the Budget for the 2012-2013 fiscal year.

While eyes will be fixed on the estimates of expenditure, it will be Phillips' revenue-generation measures that will capture the spotlight. Like many Jamaicans, we anxiously wait to see whether Phillips will dare attempt to tax basic food items such as salt, sugar, flour, rice, yam, banana and cabbage.

At the last sitting of the special committee considering the green paper on tax reform, North Central St Andrew Member of Parliament Karl Samuda, told the private-sector representatives that they faced a tough task in convincing legislators to apply GCT to basic food items.

First-time MP Damion Crawford of East Rural St Andrew, attempted to make a similar point when he argued that a proposed $2-billion allocation to the Programme of Advancement Through Health and Education (PATH) to provide targeted assistance to the vulnerable, would result in approximately $1.60 more per meal to PATH beneficiaries.

Crawford is not a member of the tax committee, but was allowed by Phillips to speak, a privilege Phillips withdrew soon after Crawford's intervention.

It remains to be seen whether Phillips would be so minded to follow the recommendations of the private sector working group when he drops the tax axe. If he does so, Phillips would be going against the wishes of Prime Minister Portia Simpson Miller, who has already said her Government would not impose GCT on basic food items.

One wonders if that declaration would be as light as the promise to remove the GCT on electricity charges to ease the burden caused by electricity bills.

Simpson Miller had declared that a PNP administration would roll back the tax. It is nearly three months since the PNP took state power, and the tax remains. The PNP had also promised to remove taxation on selected computers and ICT peripherals, and that area, too, has seen no movement.

The Gavel suspects that Phillips is waiting until the Budget debate before he takes on the issue of honouring the tax rollback promises made on the campaign trail.

We sincerely hope he will be faithful to the promise of resurrecting the tax committee of Parliament and have it deliberate on tax measures that will be heaped on the backs of Jamaicans.

Phillips has an unenviable job; he is being called upon to make tough decisions. Now, the country will watch and see whether people power, which brought the PNP to power, is as respected as the power of wealth and resources.