'I think I did exceptionally well' 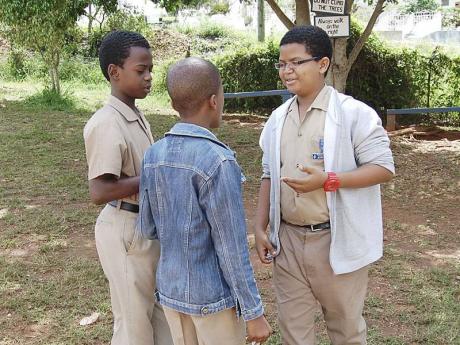 "EASIER THAN I expected," that is the view expressed by Nicholas Ebanks of McIntosh Primary in Manchester after completing the Grade Six Achievement Test (GSAT) last Friday.

"It was good. I think I did exceptionally well," he said confidently.

Last Thursday. students sat the mathematics and social studies tests, while on Friday they did science, language arts and communication tasks.

"The maths was easy; social studies a little challenging; science and language arts easy as well," Nicholas said. "The communication tasks surprised me because I thought they would have asked to write a story. Instead, they asked us to write an essay on three things about Jamaica."

After coming out of the exams, Nicholas caught up with his friends, all of whom were expressing confidence in their overall performances.

The Gleaner began following Nicholas' progress last September. Back then, he said his intention was to get a high average which would help his secure a Government scholarship. He was also bent on surpassing the 98 per cent average that McIntosh past student Shevnerine Morrison scored in last year's GSAT.

"I strongly think I did as well as I was aiming to do, but I will just see when the results come out. I know that I have put in some hard work and I am confident that the hard work will pay off," he said.

Nicholas is now anxiously awaiting the GSAT results with the hope that he will be placed in the institution of his choice - deCarteret College - the school of his big brother, Dujaun.