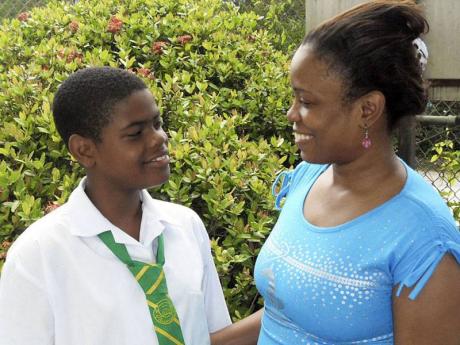 "IT'S OVER! I'm happy! I can play and watch TV now," Curtis Authors told The Gleaner last Friday, after he finished the Grade Six Achievement Test (GSAT).

The 12-year-old was one of 106 students who sat the two-day examination at Tulloch Primary School in Knollis, St Catherine.

Curtis said after he completed the mathematics and social studies papers last Thursday, he felt much more relaxed, and was even more convinced that he would do well in all five subjects.

"When I saw the math paper, I thought it was difficult, but when I started doing it, it got easier and easier until I reached in the 60s it got challenging. After I finished the 80 questions, I believe I am going to get in the 90s," he explained.

For the social studies paper, the aspiring actuary said questions one to 40 were easy, but from 40 to 50 had him thinking harder.

"And after question 50, everything was easy again. I should get in the 90s," he said smiling.

The deputy head boy said although he had three more papers to write on Friday, he went home Thursday afternoon feeling very confident that he would be among the first-formers at Kingston College come September.

Curtis said he also knew that he would do well in communication tasks and language arts, and, to a lesser extent, science on Friday.

"Language Arts was kind of challenging, but just five questions I wasn't sure about, I got 75 of the 80 questions right. Communication tasks was nice. I feel good and I know I'm going to get 11 out of 12 or 12 out of 12," he remarked after the test.

Moreover, he admitted that science wasn't as difficult as he had feared.

"I feel I only got three questions wrong, which means that I will get 57 out of 60," he oozed with confidence.