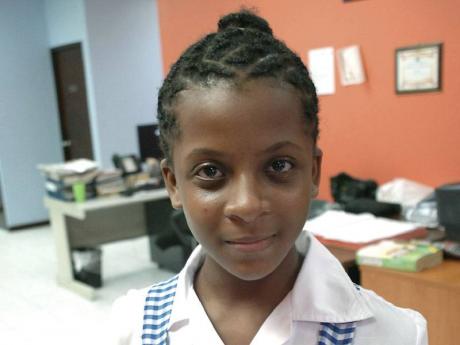 FOLLOWING MONTHS of preparation and a fight to conquer mathematics, 10-year-old Aaliyah Cookhorn left all that behind and came out of Grade Six Achievement Test (GSAT) feeling satisfied and confident.

"To be honest, I was so nervous before I did the examination that the invigilator had to help to calm me down, but once I was settled, I had no problems," young Aaliyah explained.

The Gleaner has been following Aaliyah's GSAT journey since last September as she prepared for her external examination, her aim - a government scholarship.

Mathematics was a sore point for the Falmouth resident, who attends Hosanna Preparatory School in Montego Bay, but she found a way to conquer the subject that had her worried.

"The math examination was a bit challenging, but I worked through it, so I am pretty confident with the effort," an enthused Aaliyah said after the final day of examinations.

Last October, her math score went down to 78 per cent from 86.2 per cent in September, but in her mock-exam scores, Cookhorn registered at 83 per cent in math.

"I really want to thank my family for all the support I have been getting over these months. They have really rallied around, motivated me, and made sure I stayed on track. My classmates Romey, Aylee and Tai have been great friends, because they made sure I studied while at school and helped my when I had challenges with math," Aaliyah noted.