Confident of securing a scholarship 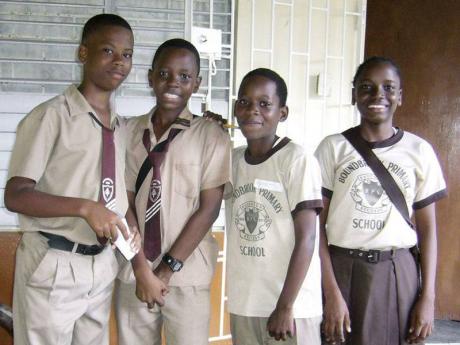 Tyrique Steele (left) along with his friends following Friday's sitting of the Grade Six Achievement Test at Boundbrook Primary. - PHOTO BY GARETH DAVIS

AFTER TWO gruelling days of the Grade Six Achievement Test (GSAT), Tyrique Steele of Boundbrook Primary School in Portland, who is on a quest to obtain a government scholarship, is optimistic about his chances.

It was a smiling Tyrique who emerged from the exam room, accompanied by friends, while touching hands with one another.

"I am even more confident," he said. "On Thursday, I completed mathematics and social studies, and I believe that I should secure 100 per cent in each. Today (Friday), I did language arts, science, and communication tasks. However, I had a little challenge with the language arts at first, but I managed to overcome that hurdle. I was never bothered by the exam, and I am highly confident that I will secure a government scholarship."

The 11-year-old student pointed out that last-minute tips from his teacher, Dian Vidal, helped him during the exam. He said Vidal repeatedly pleaded with him to ensure that he reads the questions carefully, so as to get a better understanding of what was asked.

Meanwhile, dozens of other students were on the school grounds on Friday dancing and chanting, "Tyrique! Tyrique!", who is well-known and loved throughout the school.

"My first choice of school is Titchfield High, and I want to thank the entire school population for the encouragement and love shown to me, and I aim to make them proud."