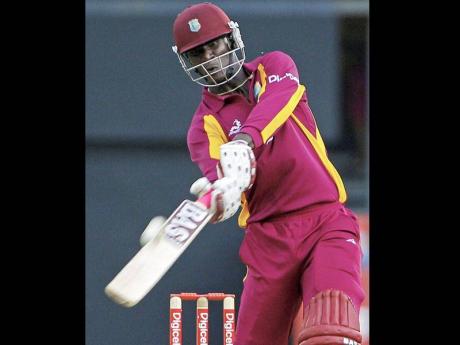 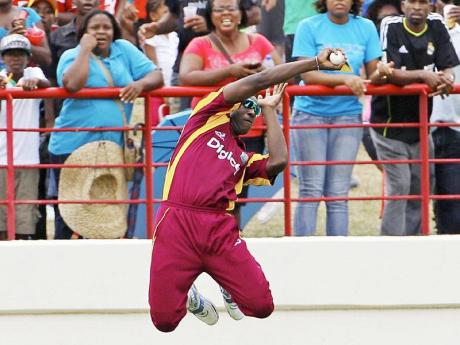 West Indies' Andre Russell takes a one-handed catch as he leaps over the boundary rope, limiting the shot of Australia's Shane Watson to only two runs, as he had to release the ball on to the field before landing over the boundary ropes, during their fifth and final one-day international cricket match in Gros Islet, St Lucia, yesterday. - AP
1
2

A valiant West Indies fought to the end, but their dreams of beating Australia in a one-day series for the first time in nearly two decades ended in disappointment with a 30-run loss in the fifth and final match yesterday.

Set an imposing 282 for victory, feeble batting returned to haunt the Windies at the Beausejour Cricket Ground, as they were dismissed for 251 off 47.2 overs.

The regional side did not surrender without a fight, however, as captain Darren Sammy produced an electrifying career-best knock of 84 from a mere 50 balls, which threatened to snatch a breathtaking come-from-behind victory.

Sammy clobbered six fours and six sixes, a combination of tremendous straight hits and searing ground strokes, to ignite a recovery after the Windies had been knocked to the canvas at 118 at seven in the 32nd over.

He instigated a record eighth-wicket stand of 101 with exciting all-rounder Andre Russell, who carved out a robust 41 from 33 balls with six fours.

The partnership, which required just 59 balls, shocked the Aussies and injected a renewed hope into the team and the capacity crowd.

However, when Russell was trapped lbw to left-arm spinner Xavier Doherty in the 41st over, the Windies dream ended as Australia quickly wiped out the tail to rescue some pride from the series with a 2-2 result.

West Indies bowlers had earlier hit back late to rein in Australia's scoring and restrict them to 281 for nine, after they galloped to 193 for two in the 37th over, seemingly well poised for a total in excess of 300.

Yet again, however, the Windies showed their resilience, producing excellent fielding and taking wickets at critical points to limit Australia to 65 runs off the last 10 overs.

Seamer Russell finished with four for 61, while pacer Kemar Roach captured three for 53, including two wickets in the final over that cost just two runs. Off-spinner Sunil Narine claimed two for 55.

David Warner slammed 69 and captain Shane Watson got 66, to get the Aussies off to a flyer with a stand of 118 for the first wicket. Peter Forrest followed up with 53 at number three before the Aussies lost their way.

West Indies' run chase was off to a dreadful start when they slipped to five for two in the third over.

Without a run on the board, opener Johnson Charles skied the fifth ball of the innings for Lee to take an easy return catch and Marlon Samuels, searching for his first score of note in the series, edged the second ball he faced - a beautiful away swinger from Lee - through to wicketkeeper Matthew Wade.

Adrian Barath, who struck 42 from 74 balls with six fours, played freely, collecting the bulk of his runs with crashing off-side strokes. He put on 32 for the third wicket with out-of-form left-hander Darren Bravo, who spent 21 balls over three before feathering the faintest of edges behind off seamer Clint McKay, in the 13th over.

Darren's older brother, Dwayne Bravo, sparked another small partnership with Barath, once again getting a start as he busily gathered 19 from 22 balls. However, he gifted his wicket in the 18th over, driving an innocuous Watson delivery to George Bailey at short extra cover.

The pressure of gathering a mere 10 runs from his previous 26 balls then got to Barath and he miscued a slog at left-arm spinner Doherty into the hands of Bailey at mid-on.

There seemed no way back for the Windies at this stage, but Sammy and Russell changed the tempo with a scintillating partnership.

Playing with gay abandon, Sammy smashed two fours and a six off Lee's seventh over which went for 16 and then helped himself to two fours and two massive sixes off McKay's eighth, which cost 22. In the process, he reached his half-century from just 20 balls, to equal his own record for the fastest ODI fifty.

Russell was rollicking along as well, striking some hefty blows, when he leaned forward, missed a straight ball from Doherty, and was lbw at 219 for eight at the end of the 41st. The decision was given on review after umpire Peter Nero had initially given a not-out verdict.

Sammy then farmed the strike to get Windies within striking distance, but the challenge proved too much and he fell to a catch in the deep off Hilfenhaus, to be last out.

A Russell lbw b Doherty 41

Man of the Match: Darren Sammy.

Man of the Series: Kieron Pollard.