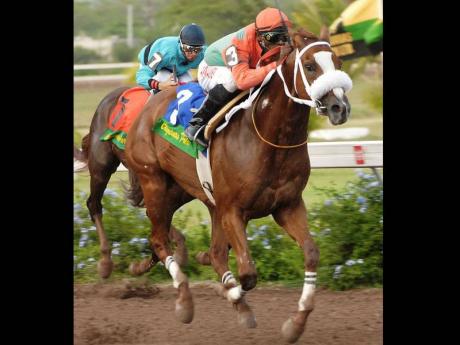 The 2010 Triple Crown winner and Horse of the Year, MARK MY WORD, became the first horse in the history of local racing to surpass the $20-million mark in stakes earnings, thanks to an emphatic victory in the Eros Trophy grade-one feature over 1400 metres at Caymanas Park on Saturday.

Trained by Richard Azan for champion owners Elite Bloodstock Limited, the classy five-year-old horse by Market Rally out of Miss Chestnut (bred by HAM Stables) pushed his lifetime total to $20.15 million, thanks to 13 wins from 21 career starts.

One of three winners for four-time champion jockey Omar Walker on the 11-race programme, MARK MY WORD, running as the 2-5 favourite under topweight of 57.0kg, won by 31/4 lengths from the highly fancied American horse, RAISE A RUCKUS, ridden by cham-pion jockey Dick Cardenas in a field of six.

Prominent in third from soon after the start as his little-fancied stable companion TURBINE led in tearaway fashion, MARK MY soon disposed of him to win easily on this his seasonal debut, having scored a runaway victory in the Harry Jackson Memorial Cup in his previous race on Boxing Day.

Randy McLean of Elite Bloodstock said he is looking forward to another successful season with MARK MY WORD, who lost out by a single vote to top sprinter SAINT CECELIA in his bid for a second consecutive Horse of the Year award.

"He's a remarkable thoroughbred and despite failing to win the Horse of the Year award again, we are not only happy with the win but the fact that he broke the $20 million mark," said the owner.

"Our hope is that he remains healthy throughout the year to win a third consecutive Superstakes," he added.

Walker followed up his recent four-timer with three winners in MARK MY WORD, SARAH BARRACUDA and MARINE TUTOR (4-1) to move into second behind runaway leader Dane Nelson in the jockeys' standings. Nelson rode two winners to move to 30, followed by Walker 23 and Cardenas (one winner) on 22.