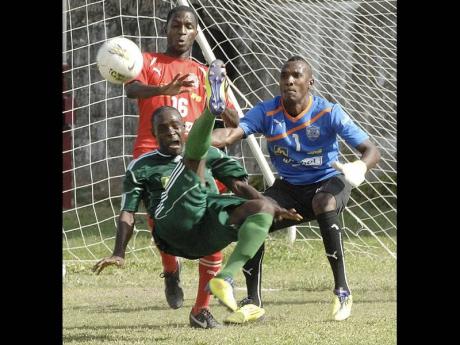 The result left the Red Brigade on 51 points and extended the gap to 12 between themselves and leaders Portmore United (63 points), which beat Arnett Gardens 3-2 further up Collie Smith Drive at the Anthony Spaulding Sports Complex.

"There are approximately 21 points to get because there are seven more games left in the season, so anything is possible," Price reasoned. "We have two more games left in this round so we have to see if we can get maximum six points from those and continue to fight," he added.

Humble Lion moved their tally to 47 points, as they seek to secure their place in the top six, which would guarantee them a place in the country's top flight next season.

The Red Brigade lacked the cutting edge expected from a team desperate for points, as their play was punctuated by misplaced passes and when they did work their way into Humble Lion's goal area they did not have the composure needed to capitalise on their chances.

"Today we turned over the ball too often. Had we kept better possession and made better passing selections we would have done a lot better because we controlled the tempo in the second half," Price lamented.

The first evidence that the Red Brigade were having an off day came in the fifth minute when their leading scorer and captain, Michael Campbell, headed onto the left upright from inside the six yards box.

Campbell got another opportunity to put his team ahead and bring his goal tally for the season to 11 in the 70th minute after being played through by Marvin Morgan. With the Lion's custodian, Garth Heron, at his mercy, Campbell appeared to have been caught in two minds and in the end opted for nothing, allowing the keeper to dive at his feet and claim the ball.

Morgan got an opportunity to be the hero in the 82nd minute when he pounced on a loose ball at the back post after Heron had parried a shot from Jermaine Allen, but from an acute angle Morgan could only find the side netting.

Humble Lion were very gritty in midfield and defence, but did not create as much in attack. They, however, did disturb Boys' Town's right post in the 35th minute, courtesy of a Wolry Wolfe free kick from 22 yards out.

"I am happy with how the team played today; it was a good game for the spectators as it was end to end," Humble Lion's coach, Lenworth Hyde Sr, expressed.

"We got a few chances where we could have scored, but Boys' Town also got two clear chances," he added.