Combined team aims at 50 for Independence 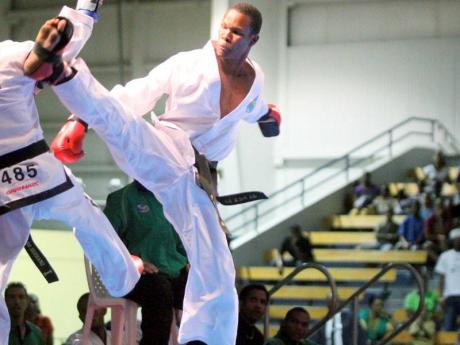 JAMAICA's combined martial arts team gets what it hopes to be a historic season underway this Saturday, when it dispatches a six-man team to the Connecticut Taekwondo Championships in the United States.

The tournament is one of seven in which the combined team will participate this year as it hurtles towards its goal of achieving 50 unbeaten matches to commemorate Jamaica's 50th year of Independence.

The 10-year-old unit is at 44 and counting, aiming to add Connecticut to its win column when members depart the island this Friday.

In what has now become a standard season-opener for the combined team, Jamaica will be led by coach Claude Chin and captain Jason McKay. The line-up is completed by Nicholas Dussard, Oshane Murray and Adrian King, plus young guns Adrian Moore and Ackeem Lawrence, both making their debuts.

Noticeably missing from the line-up is Kenneth Edwards, who has been in the United States preparing for the London 2012 Olympics. Injured Scott Wright remains sidelined from last season.

An International Taekwondo Federation (ITF) USA event, the tournament is likely to be dominated by the Jamaicans, who will field fighters in the light, middle, heavy and super heavyweight divisions.

Though debutants Moore and Lawrence may be untested in combined-team

sparring, they are no strangers to North America, having repeatedly competed at the United States Open.

Murray, who missed the Tri-Asian championship in December, has been chomping at the bit for his return and should land the heavyweight title ahead of this year's US Open, where he is expected to take Edwards' spot in the team.

Captain McKay, a regular on the ITF circuit, has consistently medalled for the last five years, but gold continues to elude the veteran.