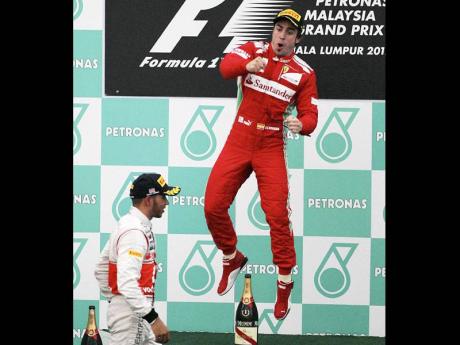 Ferrari Formula One driver Fernando Alonso of Spain celebrates on the podium after winning the Malaysian Formula One Grand Prix at Sepang, Malaysia, yesterday. - Ap

A sharp shower before the start and then a downpour from the second lap sent drivers scurrying into the pits, and amid the chaos of a stoppage after the sixth lap, Alonso proved best.

He was followed home by Sauber's Sergio Perez, who was a surprising second, with Hamilton third for the second straight weekend after starting on pole.

"This was a tough but fascinating race - firstly, I want to offer my congratulations to Fernando and Sergio - they both drove great races and did a fantastic job," said Hamilton, whose paternal grandparents hail from the Caribbean island of Grenada.

"It was a pretty eventful race: it was difficult trying to judge the best time to change from Extreme Wets to Intermediates and we were probably a little late on that, but that's how it goes sometimes.'

Hamilton was in good shape up until the race stoppage. Afterward, Alonso was quickest in the wet conditions, building a near eight-second lead by the 30th lap.

The Brit, who has never won at Sepang, said he was now aiming to extend his consistent start to the season.

"For me the next races will be all about converting our really strong qualifying pace into equally strong race pace," he noted. "That's what I'll be working in the few weeks ahead of the Chinese Grand Prix."