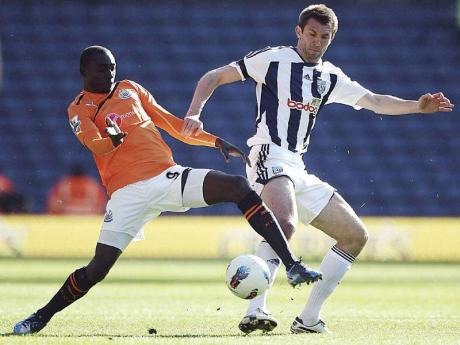 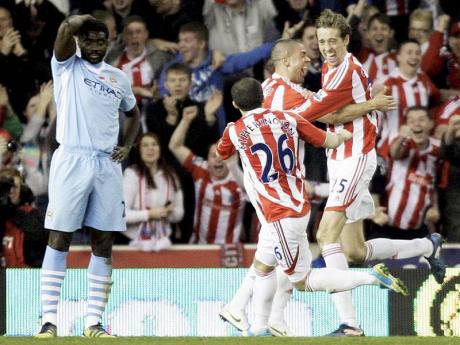 Papiss Demba Cisse scored twice as Newcastle delivered a first-half masterclass in a 3-1 win over West Bromwich Albion yesterday that maintained their unlikely push for a finish in the Champions League places.

The Senegal striker finished off well-worked moves either side of a solo effort by French playmaker Hatem Ben Arfa, virtually securing victory for Newcastle by the 34th minute at The Hawthorns.

West Brom improved after the break, with substitute Shane Long reducing the deficit in the 52nd after a defensive mix-up, but Newcastle held on to move level on points with fifth-place Chelsea.

Tottenham are five points ahead in fourth, but haven't won any of their last five matches, giving Newcastle belief they can qualify for either of the European competitions next season.

"We have to take every game as it comes, but if we can keep this momentum up, we can do it," said Newcastle defender Mike Williamson.

Cisse has made an impressive start to his Newcastle career since joining from German side Freiburg in January, scoring five goals in six league matches and striking up a good partnership with Senegal teammate Demba Ba.

Ben Arfa is also showing glimpses of his best form after being given a run in the team behind the strikers, producing an individual display that proved too much for West Brom.

The former Lyon and Marseille forward provided the cross from which Cisse opened the scoring from close range in the sixth minute.

The roles were reversed for the second, Cisse slipping in Ben Arfa on a counterattack before the Frenchman cut inside, beat his marker and rifled in a low shot into the corner.

Cisse then guided home a powerful, left-footed finish from Ben Arfa's cut-back for 3-0.

Long's goal came after Williamson dallied as he attempted to deal with a long ball over the top, the centre back ending up crumpled on the ground after colliding with goalkeeper Tim Krul, to allow the Ireland striker to stroke home into an empty net.

Cisse ended up being carried off on a stretcher in the 79th, with Pardew revealing the striker had cramps.

Pardew's diagnosis was worse for Argentina defender Fabio Coloccini, who was substituted because of injury at half-time and could miss Newcastle's next three games.

"We had a good control of our passing today and our movement was terrific," Pardew said. "To be on the same points as Chelsea is phenomenal really."

Arsenal secured their seventh straight win in the Barclays Premier League with goals from Kieran Gibbs, Theo Walcott and Mikel Arteta. Gibbs scored his first league goal for the Gunners with a low finish. And Walcott collected Alex Song's pass before directing the ball beyond Villa goalkeeper Shay Given before half-time. Arteta confirmed another one-sided win for Arsenal with an outstanding free kick in added time.

Tottenham are still waiting for their first-ever win at Chelsea in the Barclays Premier League after being held to a goalless draw. Harry Redknapp's side came close to a late winner when Gareth Bale headed against the crossbar. Emmanuel Adebayor also had a shot cleared off the line by Gary Cahill. Chelsea's Juan Mata had earlier struck a post with a free kick.

Bolton Wanderers returned to action seven days after Fabrice Muamba suffered a cardiac arrest and claimed a crucial win in the fight for survival. David Wheater headed home twice in seven minutes to give Bolton control before the interval, both goals celebrated by the chanting of Muamba's name from the home support. Steven Nzonzi pulled a goal back for Blackburn, but Bolton held on to move out of the bottom three and to within two points of Steve Kean's side.

Liverpool suffered their fifth defeat in their last six Barclays Premier League games as Wigan gave their survival hopes a massive boost. Shaun Maloney gave the visitors the lead from the spot, but his goal was cancelled out by Luis Suarez, finishing smartly from Steven Gerrard's pass. The Uruguayan had a goal disallowed for handball, before Gary Caldwell stunned the home crowd with a neat finish.

Queens Park Rangers' relegation troubles increased as they suffered another defeat and had Djibril Cisse sent off against his former club. Rangers trailed to Nicklas Bendtner's header following McClean's cross, before the Irishman struck with a low finish. Stephane Sessegnon made it 3-0, Taye Taiwo scoring QPR's consolation from a 22-yard free kick. And Rangers finished with 10 men after Cisse went for an ugly challenge on Fraizer Campbell, his second red card in four games.

A Leighton Baines free kick set Everton on their way to a first away win in six attempts and ended Swansea's run of three consecutive victories. Swansea dominated the first half but Baines struck after the break, finding the top corner from 25 yards. Nikica Jelavic wasted two chances, but the striker had a simple tap-in to deservedly extend Everton's lead.

Manchester City salvaged a point at Stoke to move to top of the Barclays Premier League on goal difference from Manchester United, who now have a game in hand, against Fulham tonight. Stoke went ahead when Peter Crouch hit an unstoppable dipping shot from 25 yards. But the visitors drew level when Yaya Toure's 35-yard strike deflected into the corner off Ryan Shawcross.