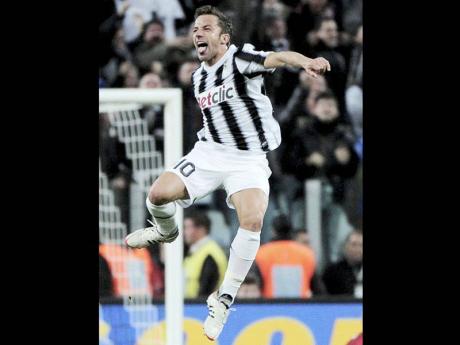 Alessandro Del Piero came off the bench to help Juventus to a 2-0 win over Inter Milan in Serie A yesterday as Antonio Conte's team kept the pressure on leaders AC Milan.

Inter left Martin Caceres completely unmarked to head Juventus into the lead in the 57th minute and Del Piero - who had scored in midweek against AC Milan in the cup - sealed the result in the 70th.

Juventus goalkeeper Gianluigi Buffon pulled off a string of fantastic saves in the first half to keep his side level in the hotly contested match, known as Italy's Derby.

Milan, which beat Roma 2-1 on Saturday, lead second-placed Juventus by four points but Del Piero, in his last season with Juve after 19 years at the club, has urged his teammates to keep believing.

"We believe we can win the title because we have the ability, of course Milan is ahead and has its destiny in its own hands," the Juventus captain said. "We have to be good at picking up points every game hoping that Milan loses some."

Inter slipped to eighth and have now won just one of their past 10 league games.

"The disappointment is that we played really good for an hour and then we conceded from a dead ball situation, lack of focus for an umpteenth time, leaving Caceres on his own," Inter coach Claudio Ranieri said. "That's where our game ended, they grew stronger and we didn't have the strength and the determination to attack like we did in the first half.

"It's a defect that we have and we're not managing to change, at the first piece of bad luck, the boys crumble."

Elsewhere, Catania came back from two goals down to draw 2-2 at Napoli after late goals from

Nicolas Spolli and substitute Davide Lanzafame. Napoli appeared to be cruising to victory after second-half goals from Blerim Dzemaili and Edinson Cavani. But Spolli pulled one back in the 75th and Lanzafame equalised in the 80th, two minutes after coming off the bench.

The result is a blow to Napoli's bid for third place, especially after Modibo Diakite's late winner gave Lazio a 1-0 victory against Cagliari. Lazio are third, three points above Udinese and Napoli.

At the other end of the table, Novara were held to a scoreless draw at home to fellow strugglers Lecce, which will have helped neither side's hopes of avoiding the drop.

Cesena were held to a 2-2 draw by Parma and were unable to take advantage of Novara's draw. Genoa also drew 2-2, with Fiorentina, thanks to Rodrigo Palacio's equaliser a minute from time.

Gabbiadini headed into the net in the 50th minute and Tiribocchi sealed the result in stoppage time to inflict Bologna's second loss of 2012.