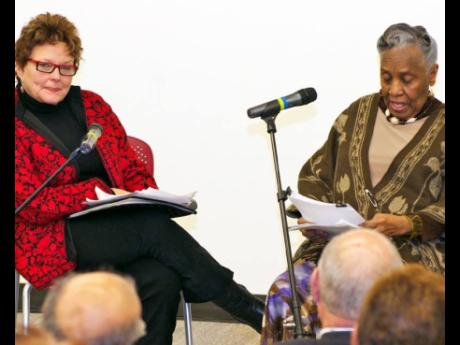 "We are going in a different direction this year with the Actor Boy Awards," Scarlett Beharie, president of the Jamaica Association of Dramatic Artistes (JADA), organiser of the annual award ceremony, told The Gleaner.

"Instead of having one major event as we usually do, we are having a week of activities in celebration of World Theatre Week," she explained.

The week-long activities, done in collaboration with the International Theatre Institute (ITI) Jamaica, will include a symposium, poetry reading, and a directing workshop; concluding with the award ceremony.

The first activity will be the symposium, today, World Theatre Day. The theme of the symposium will be 'From Periphery to the Centre, Theatre at Jamaica 50'. The event begins at 6:30 p.m. at the Dennis Scott Studio on the grounds of The Edna Manley College of the Visual and Performing Arts (EMC).

The title of the symposium, Beharie explains, is self-explanatory.

"We are looking to discuss how we can move forward to be a little more visible and to get some of the recognition that we deserve in the creative industry," explained Beharie.

"It has to do with how this country views the performing industry. It is something that we take for granted. We like to talk about how talented we are, but we are still a far way off understanding the talent and the value of this talent.

"Come and do this reading, come and do this play, and nobody thinks about the work, the time, the effort that goes into preparation; and the training. It is a very, very demanding area to be a part of," Beharie said.

She further stated that this lack of recognition is in spite of the contribution of theatre practitioners in making a solid name for Jamaica on the world stage.

"I always find it a little funny when people talk about Jamaica on the world stage. They don't talk about the ministers, and they don't talk about whatever policies they come up with. They talk about the music, about Bob and Miss Lou and Maas Ran (Ranny Williams), that's how we identify ourselves. So it is very ironic that the very facet that we use to identify ourselves as a people and as a movement is an area that is extremely underdeveloped, underutilised and unappreciated."

Ford-Smith will be looking at the works of Stafford Ashanti, Dennis Scott, with some references to Trevor Rhone, and also Marcus Garvey, in his role as producer.

Garvey is one of Jamaica's early producers, giving opportunity to people like Maas Ran and Louise Bennett.

That event will also be held at the Dennis Scott Studio and will start at 6:30 p.m.

Thursday will see the reading of poetry written by ITI members from the United States, Sweden, some countries in Africa, and Germany, among others. The readings will be done by Jamaicans from the Edna Manley College of the Visual and Performing Arts. The Theatre Day message from John Malkovich will also be read.

The event takes place at 7:30 p.m. in the ampitheatre of the EMC.

The three events are free.

On Saturday, Yvonne Brewster, the internationally acclaimed director, will be conducting a directing workshop for specially invited guests.

After the Actor Boy Awards and the week-long celebration comes to an end, JADA still has an extra treat.

On April 9, the organisation will be holding what it terms a 'Theatre Night Out'. On that night at the Little Little Theatre, persons will be offered two plays, Back a Yaad and Where is My Father? at a discounted price.