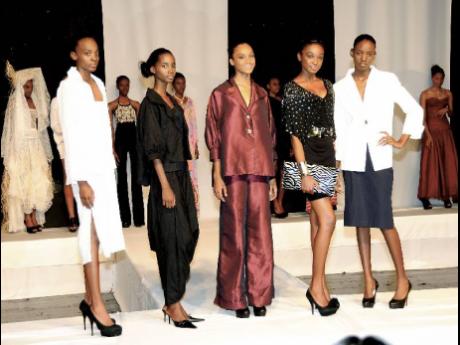 Only days after staging the 12th final of the Fashion Face of the Caribbean, Saint International's CEO Deiwght Peters has revealed that at least two of the top-five finalists have been offered modelling contracts with leading model agencies whose agents were judges at the event.

"We had one of the strongest panels of judges to ever sit simultaneously on a panel of any model competition in Jamaica over the last several years," he boasted. That panel boasted some of the most prestigious and highly respected names in the fashion business - ELITE, Women Worldwide, MUSE Models and Wilhelmina were part of the 'face makers' panel at the event.

"We are so thrilled to confirm your lovely Tami Williams with Elite New York!," read an email sent to Peters from Elite New York judge Delpha Ramos. The confirmation would later come after a conference call with one of the most influential model bookers in the global fashion market and his team.

Peters also revealed that Fashion Face of the Caribbean 2012 winner Christina Knight has several options open to her.

Other top-five casts such as Anouchka McCalla and Kacey-Deane Brown have also enjoyed positive feedback from the international panel. "The comments on the quality of our finalists have been amazing from every judge," Peters noted. "Many have already confirmed attendance next year," he continued.

Saint has done well at getting new faces signed to leading model agencies across the world. In many instances, the winners of Fashion Face of the Caribbean have been signed on the spot, the interest also extending to runners-up. Winners from the competition as far back as 2005 are still signed and working with leading agencies and top fashion clients across the globe. World-leading fashion brands such as Givenchy, Calvin Klein, Louis Vuitton, Lacoste, Yves St Laurent, Issey Miyake, Rachel Roy, Tracey Reece, Marc Jacobs, Italian Vogue, Moschino, GianFranco Ferre, and other leading fashion brands have used Saint models from the Fashion Face contests in runway shows, editorials and marketing campaigns.