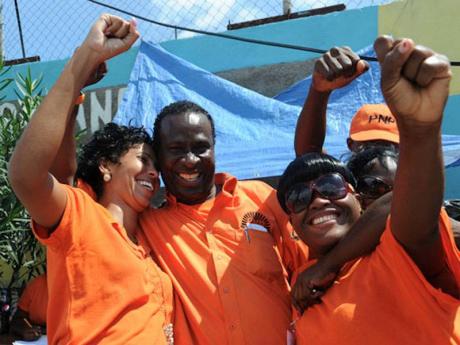 AFTER BEING kept in the local government wilderness for nine years, the People's National Party (PNP) yesterday made a triumphant return, winning 13 of the 14 local authorities.

The PNP won 11 of the 12 parish councils as well as the Kingston and St Andrew Corporation (KSAC) and the Portmore Municipality.

"We have done it again," PNP President Portia Simpson Miller said during a victory address at party headquarters in St Andrew last night.

"The leader of the opposition asked for a referendum. You got one on December 29 and you got one tonight again," added Simpson Miller, who is also the prime minister.

"Now that the election is behind us the government can now settle down and address the problems facing the nation; and they are many."

PNP Chairman Robert Pickersgill told The Gleaner last night that expectation levels for the Government are very high and have to be managed.

"People can become agitated if not despondent," Pickersgill said.

"Our MPs and councillors must be out there with the people. Thepeople have voted for progressive change and we must deliver," he said.

The two Independent candidates who won in yesterday's elections are Lester Crooks in the Riverside division of West Hanover and Paul Patmore in the Lorrimers division in South Trelawny.

Crooks, a former mayor of Lucea, won the Riverside division. He polled 1,216 votes to the JLP's Albert Lee 770 votes. The PNP did not field a candidate.

The win for the PNP adds to the general election success achieved in the December 29, 2011 polls. Then, the PNP won 42 seats to the JLP's 21 in the 63-seat House of Representatives.

The JLP won all but four parish councils in 2007 - Manchester, Westmoreland, Hanover and St Ann.

Numbered among the winners in yesterday's election is Daren Powell, the former West Indies fastbowler, who contested the Malvern division in the St Elizabeth Parish Council for the PNP.

In Morant Bay, St Thomas, Rohan Bryan of the PNP appears to have called curtains on the political career of Rosemarie Shaw. Bryan polled 2,236 votes to Shaw's 1,728 votes.

He added: "The party was mobilised, the workers came out and they gave it their best shot. It was always a very difficult task given the majority by which the People's National Party had won the general election."

Less than 30 per cent of the people voted in yesterday's election and a few of the seats were determined by fewer than a dozen votes.

In St James, Heroy Clarke of the JLP and the PNP's Knollis King were tied in the Montego Bay South East division in Central St James, each polling 1,328 votes.

Similarly close was the Frankfield division in the Clarendon parish council where the JLP's Clive Mundle polled 1,417 to beat the PNP's Orville Hackett by two votes.

In Montego Bay West, Mexine Bissasor of the JLP polled 400 votes but fell six short of the PNP's Stanley Harris.