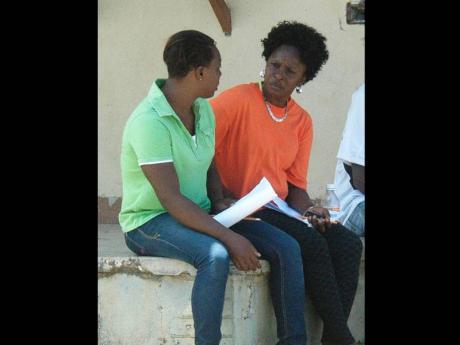 Sharing their boredom ... a PNP party worker and her JLP counterpart in conversation in Sandy Bay, Hanover. - Photo by Adrian Frater

It was a laid-back day in western Jamaica as electors across the 62 parish council divisions trickled into polling stations to cast their ballots.

The Malvern division in South East St Elizabeth was the only place with some energy as workers from both the governing People's National Party (PNP) and the Jamaica Labour Party (JLP) rallied their supporters.

There is much interest in this division where former West Indies fast bowler Daren Powell mounted a challenge against the JLP incumbent Donald Simpson.

The JLP won three of the councils in the west, namely St Elizabeth, St James and Trelawny.

Mayor of Savanna-la-Mar in Westmoreland Bertel Moore said he was confident that all 14 PNP candidates would be sworn in on Thursday.

There were more workers than voters in Hanover, but at one hour before the close of polls, the PNP said it had four of the seven divisions. The Riverside division in Western Hanover was one of the closely-watched seats, as it was the only division in which the PNP had not nominated a candidate.

Former JLP Mayor of Lucea Lester Crooks, who reportedly failed in a last ditch bid to represent the PNP, won as an Independent candidate but reportedly has the backing of PNP supporters.

The electors in St James showed little interest, and also turned down offers for free rides to polling stations.

Just over 30 per cent voter turnout was recorded in the five parish council divisions in Northern Trelawny.

In South Trelawny, all eyes were on Independent Paul Patmore of the Lorrimers Division who was victorious over sitting JLP councilor Steve Warren.

Patmore, who was expelled from the JLP earlier this month after he was nominated to run as an Independent candidate, had a full team of workers including indoor and outdoor agents.