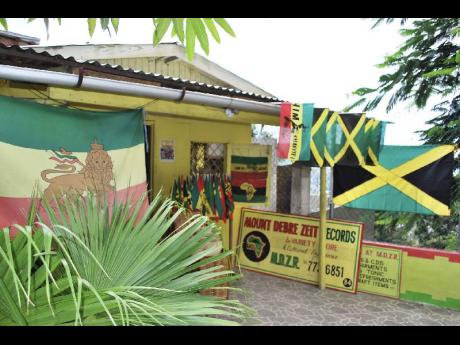 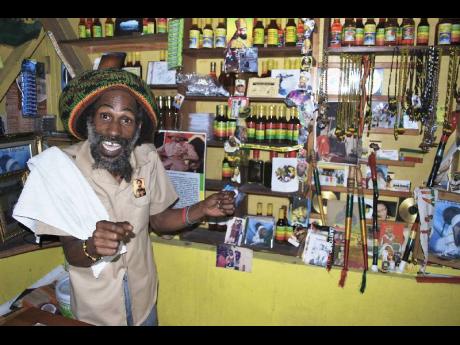 Ras Malicot singing a happy song inside his shop. 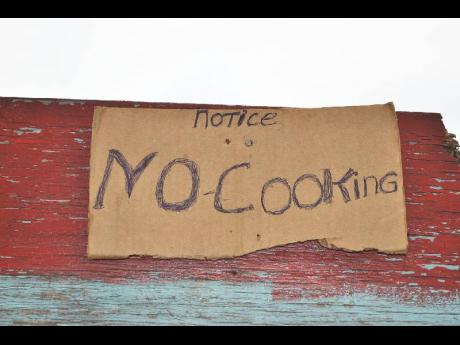 While standing inside a musty, almost empty room with a chatty dreadlocked man who may or may not have been planning a revolution (I'm not entirely sure), I seriously started contemplating some of life's most pressing questions. Why are we here? What happens when we die? And what the heck was I doing in this room?

His name is Luel Ras Mesfin Haile Selassie I and we met quite by chance outside his humble home along Gordon Town Road in St Andrew. A friendly fellow with a real gift for gab, Luel sought to impart to me, a bewildered stranger, knowledge he gained through several years of introspection and research. Much of it involved the horrors of capitalist economic systems and something about governance and the tyranny of debt. Clearly I missed something.

As Luel talked though, I looked around the room. There was a poster on the wall with the words 'Nation of Jah Ras Tafari' written on it, an overturned chair, a table, and a strong smell of burning wood. I wondered where the smell was coming from and silently hoped it wouldn't attach itself to me.

I tuned back in just in time to hear Luel say, "You understand what I am saying, brother?" I nodded and added a purse of the lips for dramatic effect. Luel smiled, apparently grateful to have got through to me. I glanced at my watch and told him that I really needed to go. We shook hands and I walked out into the sunshine.

I headed up the road and within seconds someone called out to me.

"Hail di man!" It came from inside a shop of sorts painted in bright colours. There were flags hanging all around. I walked closer and peeked inside. There, sitting behind a counter stocked with craft items and small bottles of something-or-another, was a smiling dreadlocked man wearing a tam. His shirt was khaki and badges were pinned to it. I walked in. I introduced myself to the man and told him that I quite liked what he had done with the place. You can never have too many flags.

"Yes, man. My respect, man," he said. He told me to call him Ras Malicot. Now Ras Malicot, in addition to being a well-known brewer of roots wine and other beverages concocted with natural herbs and spices, is actually quite a nifty singer. Within minutes of meeting me, Ras Malicot launched into an energetic rendition of an encouraging ditty about wiping away transgressions. I felt a little awkward at first, standing stoically in front of this man gyrating and fist-pumping to a rhythmic reggae beat. But by the time the chorus kicked in, I was hooked. It started with my feet. I began tapping to the beat, then my head started bopping and before I knew it, Ras Malicot and I were jamming together inside that small roadside shop. A few people walked by, but oddly enough, nobody seemed to think the scene was out of the ordinary. They waved to Ras Malicot as he sang and nodded at me as if to indicate that they shared my apparent enjoyment. By the time the song was over, I was a fan. I told Ras Malicot that I enjoyed the performance.

"Well, give thanks and praise," he said. "We love music because it speaks from the soul. We make roots wine and craft, but that is not all. This is Jamaica and Jamaican people full of talent. Sometimes you see somebody and you don't know the truth about who they are. But if you stop and spend the time to find out, you might be surprised by what you find," he said.

Where should Robert go next?

Let him know at robert.lalah@gleanerjm.com