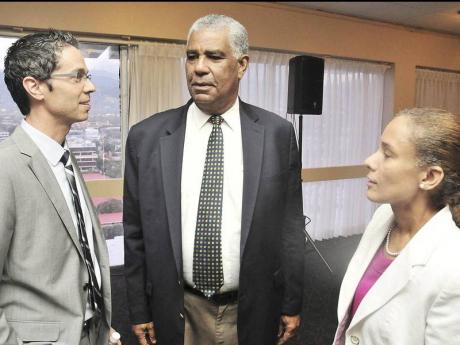 Evelyn Smith (right), president of Jamaica Hotel & Tourist Association (JHTA) and director of tourism, John Lynch (centre) with Adam Sacks, founder and managing director of Tourism Economics, an Oxford Economics company, at the press conference to present the findings of the study 'Travel & Tourism as a Driver of Economic Development in Jamaica', commissioned by the JHTA and executed by Oxford Economics, at The Jamaica Pegasus hotel, New Kingston, on March 20, 2012. - CONTRIBUTED

A local tourism study by Oxford Economics proposes a revolutionary view that three-quarters of the J$229 billion in annual tourism earnings remain within Jamaica, which indicates the sector's increased importance to local commerce.

The study, titled Tourism as a Driver of Jamaica's Economic Development, essentially expands on Government's direct accounting of the tourism sector as amounting to 7.3 per cent of gross output by including indirect and induced value - or its economic value.

Oxford Economics' estimate is 19.5 per cent.

The study flipped a long-held position that leakages account for between 60 per cent to 80 per cent of tourism earnings.

"It debunks a widely held view that the industry funds leakages," Adam Sacks, who conducted the study, told Wednesday Business in an interview.

Last May, a 300-page document titled The Jamaica Country Economic Memorandum, published by the World Bank, quoted a United Kingdom (UK) study which indicated that tourism leakages in Jamaica totalled some 80 per cent.

"People who have that position are not looking at real financial data," said Sacks, president of Tourism Economics, an Oxford Economics company, who based his findings on primary data, including private hotel financials and secondary research data from the Statistical Institute of Jamaica.

The study was commissioned by Jamaica Hotel and Tourism Association (JHTA), which is currently lobbying against the removal of tax waivers from the sector as proposed by an amalgam of local business groups.

Sacks argued that 71 per cent of expenditure remains within the island: 33 per cent of which relates to payment of salaries to locals or value-added services, while 38 per cent relates to local purchases minus imported components.

Leakages account for the balance or 29 per cent, he said, from his office at Tourism Economics in the United States (US), which is affi-liated with Oxford University in the UK.

"When you look at the purchases and the structure of the industry, a significant amount of inputs are locally produced. Also, 20 per cent of the manufacturing sector (output) in Jamaica is derived from tourism linkages," he said. "So 29 per cent is leaked, but 71 per cent remains within the island."

The report stated that tourism's J$229-billion contribution represented 19.5 per cent of total output to the economy, which bettered any other sector. Sacks argued that his findings expanded on the Statistical Institute's (Statin) position in order to show the economic impact of tourism.

"We agree with Statin numbers which represent the tip of the iceberg," he said. "Statin measures the direct value-added contribution of hotels, attractions, tours and shops. It doesn't measure the indirect suppliers and the induced impact of tourism-generated incomes spent within the economy."

The study additionally stated that the sector contributed J$38 billion in taxes to Government, or 20 per cent of total taxes. Additionally, the sector generates J$226 billion (US$2.5 billion) from expenditure, of which about US$2 billion relates to earnings from foreigners.

"It reaffirms the tremendous contribution to the economy. The study indicates that one in four are employed to the sector," said Evelyn Smith, JHTA president. "It also indicates what more can we do with tourism to spur additional economic growth."

The study recommends that future development should focus on higher end products, including major US brands. It recommended utilising casino licences as a lure for these brands.

The Private Sector Working Group (PSWG) on tax reform last month proposed 145 measures to raise some J$7.3 billion in new taxes for the Government, among them the removal of hotel tax waivers. Hoteliers have access to a 10-year tax holiday for investments in new or existing properties.

The incentive applies to existing hotels adding a minimum of 10 rooms or 30 per cent of the existing number of rooms, whichever is greater, or to existing hotels that have done or intend to do substantial structural alteration as well as new hotels.

Approved convention hotels with 350 or more bedrooms are entitled to income-tax and import-duty relief ranging from 11 to 15 years.

The PSWG hopes some of its proposals will be accepted by the Government for implementation at the start of the new fiscal year on April 1.

Dr Peter Phillips said on March 22 that the white paper on tax reform is to be tabled in Parliament at the same time as the estimates of expenditure for fiscal year 2012/13.

CAPTION: Evelyn Smith (right), president of Jamaica Hotel & Tourist Association (JHTA) and director of tourism, John Lynch (centre) with Adam Sacks, founder and managing director of Tourism Economics, an Oxford Economics company, at the press conference to present the findings of the study 'Travel & Tourism as a Driver of Economic Development in Jamaica', commissioned by the JHTA and executed by Oxford Economics, at The Jamaica Pegasus hotel, New Kingston, on March 20, 2012. - CONTRIBUTED