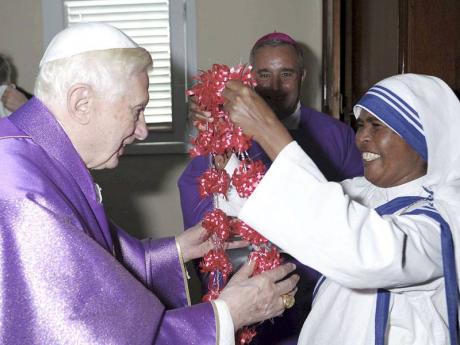 Pope Benedict XVI is greeted by a Sister of Charity nun during his visit at the sanctuary of the Virgin of Charity of Cobre, Cuba's patron saint, in Santiago de Cuba, Cuba, yesterday. - AP

A top Cuban official disclosed yesterday that there are no prospects for political change on the communist-run island despite Pope Benedict XVI's appeals for "renewal" and "a better society".

Marino Murillo, Cuba's economic czar and a vice-president on President Raul Castro's council of ministers, said that while the country is shaking up its economy, "in Cuba there will not be political reform".

Murillo's comments to a room full of journalists covering the papal visit were a quick and categorical response to comments by Benedict earlier in the day, when he made a highly symbolic prayer visit to the shrine of the nation's patron saint.

"I have entrusted to the Mother of God the future of your country, advancing along the ways of renewal and hope, for the greater good of all Cubans," the pope said at the sanctuary in the little town of El Cobre.

On the second day of his Cuban tour, the pope knelt silently before the Virgin of Charity of Cobre for several minutes, his eyes open and hands clasped.

The crowned, wooden statue just over a foot (35 centimeters) tall stood on a covered table shrouded in blue and white cloth. The 84-year-old pontiff then rose with the help of two Cuban bishops, approached the statue, lit a candle and stood in prayer as a choir sang hymns.