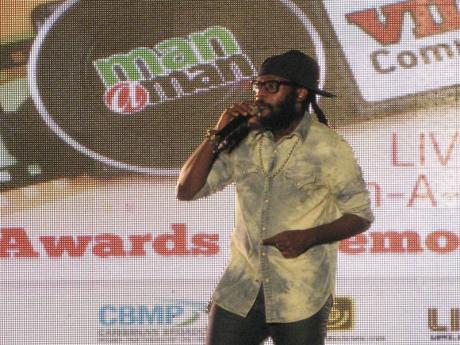 Tarrus Riley was in fine form at Emancipation Park, New Kingston, on Sunday. 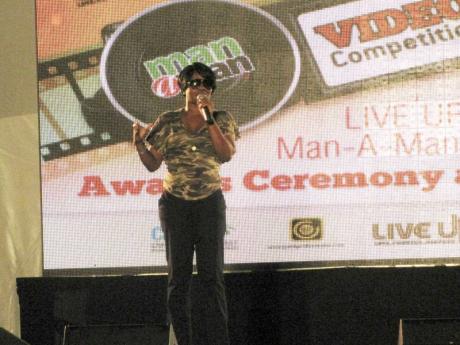 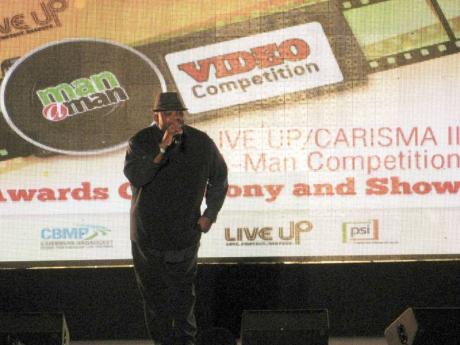 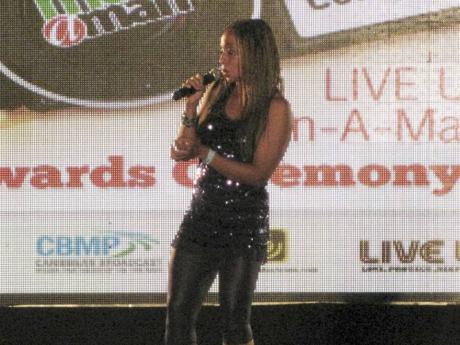 Nadine Sutherland onstage at the awards ceremony and concert for the Man A Man: LIVE UP Video Competition on Sunday evening at Emancipation Park, New Kingston. - Photos by Mel Cooke 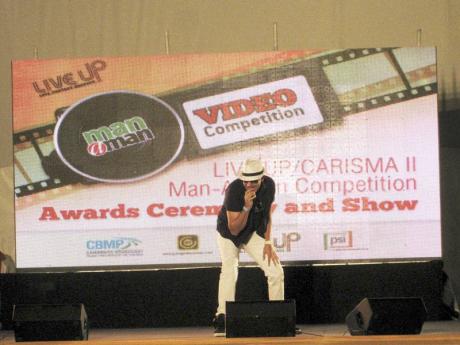 Sunday evening's announcement of the top three Man A Man: LIVE UP Video Competition entrants at Emancipation Park, New Kingston, was a combination of an awards ceremony and concert, the substantial audience naturally seeming to enjoy the latter much more.

Danar Royal took the first-place trophy and cash prize for his video Jamaican Man in which Akeem Mignott, Tyane Robinson, Melbourne Douglas and Petrina Williams participated. Randy McLaren was second with True Jamaican Man and also took the People's Choice Award. Rounding out the top three is Gariece McPherson with an intensely personal video about his role in raising three children, including twins, in which he shoots down the notion of males doing housework being unmanly.

The awards ceremony and concert was the culmination of a project in which another concert, Rebel Salute 2012, had played an important role as a launching pad. Music was always a part of the plan, Junior Kelly, Ashe and Take Five among the performers listed for the awards ceremony.

Focusing on men 18 to 24 years old, entrants were asked to make a two-minute video speaking to the theme 'Faddahood and Manliness Inna Dis Ya Century'.

The performances, concentrated after the presentations, were a mixture of soca and reggae, Rupee declaring his appreciation of things and people Jamaican - jerked chicken, mannish water, bean soup and women, moving into Tempted to Touch. The soca continued with the instruction to "jump around the place", which many persons happily did, Rupee coming off the stage to get closer to the dancers and have a little girl shout the refrain into the microphone.

Nadine Sutherland waited a few seconds for an uncooperative CD to play the music for her performance, then did Babyface without music to good effect, audience members keeping time with a steady clap. When she was finished and the applause had subsided, the CD started to play, but Sutherland said it was okay. A cappella proved an excellent choice for The Greatest Love of All, the George Benson original remade by the late Whitney Houston.

Tony Rebel chose to get close to the audience from the get-go, performing from the side of the stage. The ultra-patriotic Sweet Jamaica hit the spot and If Jah is Standing By My Side put the audience over the top, Rebel adding on bits of Everton Blender and Ras Shiloh material.

Welcome to the fête

Etana gave her input on condoms in a recording shown on the big screen, Biggie Irie taking the evening back into soca as he welcomed "people in the fête".

It was not a rag-waving soca frenzy kind of showing, Biggie going into reggae with a good cover of John Lennon's Woman, due out in June on a tribute CD to the late Beatle.

Tanya Stephens' dismissal of tolerance ("tolerance mean you think people need your permission") was well made. Before opening with Do You Still Care?, Stephens spoke to clothing and manhood. "If a man wear a tight pants it no make him less of a man. Is a man who wear tight pants. If him bleach him is not less of a man. Him jus' have a problem with himself," she said, adding that as a society we need to embrace people who have problems.

On the introduction to I'm Still Alive, Stephens made a sudden stop due to a swallowed mint, laughing as she called for someone to slap her back and eventually continuing after getting some water.

Hosts Jenny Jenny and Devon Hunter gave thanks all around before Tarrus Riley, who opened with a snippet of Lion Paw. He teased the audience, saying that singing was hard and offering them a choice of alternative professions for himself, among them plumbing, carpentry and "fix car". All were refused, but when he said singing there was an enthusiastic yes.

There were whoops for She's Royal, Riley amending a line to "Jamaican girls a queen". There were many willing to fit in for Konshens on Good Girl Gone Bad and Riley introduced a patriotic song to the crowd, declaring that in many areas of life "a we run it". The multi-artiste finale was the standard One Love.

First-place Royal told The Gleaner that he started to think of what he would do "the minute I heard of the competition". He went through a process of refinement, doing workshops on the material until he came to the final version. He went through several titles before coming full circle and settling on the first one he had come up with.

McLaren said that "I had a template from even before the competition", as he has been interested in the topic for some time.