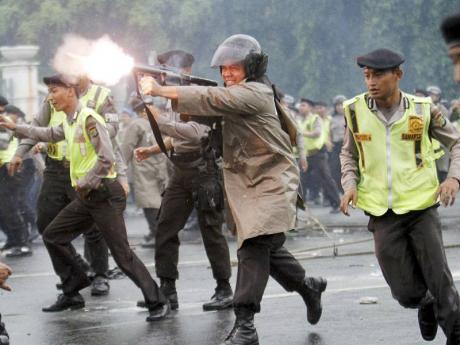 An Indonesian police officer fires a tear gas launcher to disperse student protesters during a protest against the government's plan to raise fuel prices in Jakarta, Indonesia, yesterday. Police fired tear gas and water cannon to disperse thousands of rock-throwing Indonesians protesting plans to push up fuel prices by more than 30 per cent. - Ap

Police fired tear gas and water cannons to disperse thousands of rock-throwing Indonesians protesting plans to push up fuel prices by more than 30 per cent. Several people were injured and rushed to hospitals.

Rallies were held under tight security in big cities all over the country yesterday as parliament debated the hike.

Some lawmakers said the government had no choice but to cut budget-busting fuel subsidies, which have for years enabled motorists to fill up for roughly $2 per gallon. Others argued raising prices could more than double inflation to seven per cent.

With global oil prices surging, most Indonesians realise there's little choice. But that hasn't stopped thousands in a nation of 240 million, many of whom live in abject poverty, from taking to the streets every day for the last week.

If a price increase is approved, it will go into effect Sunday.

Security was especially tight in the capital, Jakarta, where 20,000 soldiers and police were deployed to secure key locations, including the presidential palace.