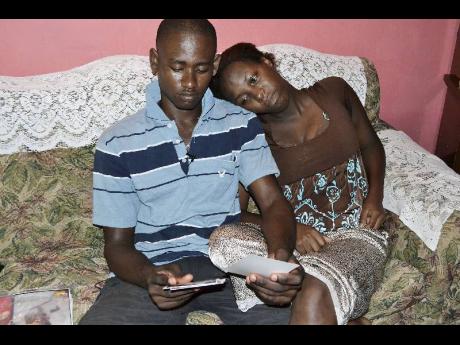 Desmond Hird and his partner, Donna-Lee Ferguson, look through photographs of their twin babies at their home in Rosend, St Mary, days after the newborns died following a premature birth. - Errol Crosby/Photographer

At 11:13 p.m., a baby boy was born at the Annotto Bay Hospital in St Mary. Twelve minutes later, his twin brother joined him, as a breech birth.

Together, they weighed less than a bag of sugar, and at 26 weeks' gestation they were severely premature. In the hours that followed their birth on Sunday, March 18, tragedy would overshadow the twins' divine entry into this world.

"I heard only one cry, but it was like really good, just to hear the baby cry except if I knew if something was going to be wrong," muttered first-time mother, 21-year-old Donna-Lee Ferguson.

Around 3 o'clock on Monday morning, Deondre Ferguson's heartbeat began to weaken. His tiny, underdeveloped lungs made his breathing shallow as he struggled, even with the help of a ventilator, to supply his weakened body with the oxygen it needed. Despite being placed in an incubator, Deondre, who was named after his grandmother, Deon, had left the comfort and warmth of his mother's womb, a transition which proved too traumatic, and early for him to manage. As the clock neared 4 a.m., Deondre's heartbeat slowed to a stop, his gasps for breath ceased, and his ventilator was turned off.

Meanwhile, Deondre's brother, Leondre, was fighting for his life.

"He didn't cry and because he was 'breeched', he came out like footway," said Donna-Lee, staring vacantly at her living-room wall, numbed by a crippling grief.

"They told me they weren't sure that he was going to live; they were trying their best to get him to a hospital in Kingston."

Paediatric nurses at the Annotto Bay Hospital had told Donna-Lee that her remaining son's only chance of survival was to be transferred to a specialist neonatal unit in Kingston. Frantic calls were made to hospitals across the island's capital but there was no space for little Leondre, even at one foot tall.

A call to a private medical facility in St Andrew offered some hope. Leondre's survival now rested on a $35,000 deposit, but before the Ferguson family was given a cost for his hospital transfer fees and medical care, Leondre's heart rate began to fall - he, too, would follow his brother's lead, death became his destiny.

Now seated in the living room of her Rosend, St Mary, home three days after her nightmare unfolded, Donna-Lee recalls the tragedy that befell her family, telling The Gleaner she does not think she can ever overcome the deaths of her newborn sons.

"It's kind of indescribable, having two babies and both of them dead was really hard," she told The Gleaner as a single teardrop left her eye and made its way down her cheek.

Resting her head on the shoulder of her partner, 26-year-old Desmond Hird, Donna-Lee spoke of witnessing the demise of her last born just hours after his brother lost his fight for survival.

"I was there at first but I couldn't stand it, because just watching the heartbeat falling and I asked if I could hold him, they said no I could only touch him. So I held on to him for a while, then I went back to my room. I was practically asleep, and something just, I just jump up and put on my slippers and by the time I reached up there, the baby was already dead."

Thumbing the edges of the only photographs the family took of the twins, a stolid Desmond talked of his function as an emotional rock for the mother of his two dead sons.

"I was strong, yeah, when everyone see me, they say, 'How it come in like mi nuh feel nutten'? and mi seh, 'A nuh everybody show their feelings. Everyone show their emotions different'."

"Sometimes there just is no equipment to support babies coming from the outside because there is just not enough," said Dr Lisa Frankin-Banton, president of the Paediatric Association of Jamaica.

"As doctors, our first intention is to preserve and maintain life, but we do have to work with the resources that are available to us. It is unfortunate that at that time, there were no ventilators available to assist these newborns, these premature infants ... ," Frankin-Banton said. "It would be nice if we had more neonatal units to accommodate such premature infants, but unfortunately we don't and it's just something that we have to work towards."