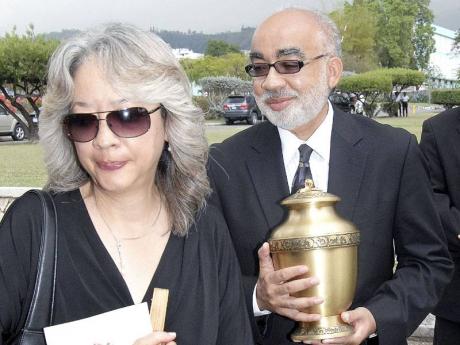 Charmaine Burrowes and her brother, Justice Andrew Rattray, with the urn containing the remains of their father, Justice Carl Rattray, after the official thanksgiving service at the University Chapel, University of the West Indies in Mona, St Andrew, yesterday. - photos by Ian Allen/Photographer 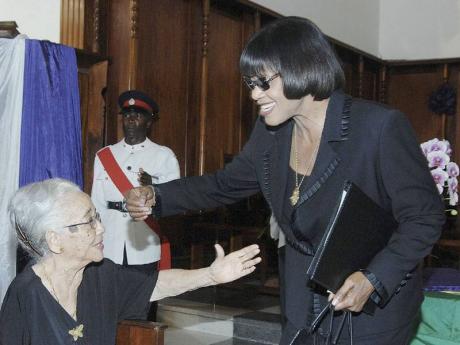 Remembered for his exemplary role as a jurist, politician, attorney, justice minister, human-rights activist, father, husband and friend, several persons hailed him as one of Jamaica's most unique and outstanding sons.

In paying tribute to his friend and founding partner in the law firm Rattray Patterson Rattray (RPR), former Prime Minister P.J. Patterson noted that Rattray was first and foremost a human being who sought to find in each individual some redeeming grace.

"For Carl Rattray, justice was like the holy grail," stated Patterson.

Noting his role as a bold champion for social justice, his renowned generosity and unquestionable patriotism, Patterson said Rattray made good use of his legal standing to assist the downtrodden and unfortunate.

"From time to time, we are privileged to have giants walk among us, giants who guide us and lead us by example and whose presence changes the landscape of our nation. Carl Rattray was the gentlest and brightest of giants," stated Patterson.

Chief Justice Zaila McCalla hailed Rattray for his outstanding contribution to the justice system, calling him a man with social conscience who was consumed with a passion for justice.

"After ailing for some time, this kind and gentle son of our Jamaican soil has taken his exit from the stage of life. The memory of our brother Carl will be cherished by us all forever. His record of achievement was a lasting legacy of the important contribution he has made to the administration of justice in our beloved country. He has now taken the journey onward and upward to dwell in one of the many mansions of our Father's house," shared McCalla.

In a remembrance permeated with hilarious stories of Rattray's notoriously bad driving and forgetfulness, family friend Howard Malcolm also expounded on the former justice minister's exceptional qualities, adding that he was a man who enjoyed life to the fullest.

Rattray died on March 14 at age 82 after a bout of illness. He leaves behind widow Audrey, four children, nine grandchildren and other relatives. His cremated remains are to be privately interred at a later date at the Sts Peter and Paul Columbarium.