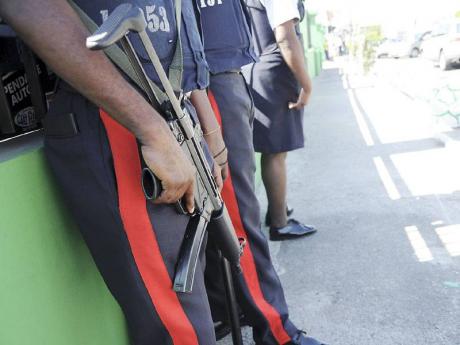 Police stand guard in the vicinity of a peaceful demonstration put on by human-rights lobby Jamaicans for Justice and the Jamaica Civil Society Coalition near the offices of the Ministry of National Security in St Andrew yesterday. - photos by Ricardo Makyn/Staff Photographer 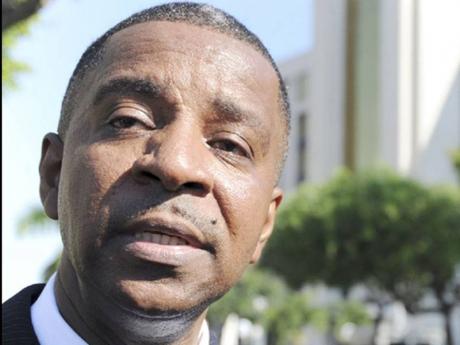 Superintendent of Police James Forbes of the Police Community and Security Branch addresses the media. 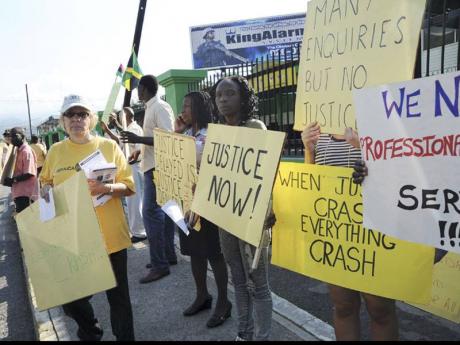 Eyebrows were raised yesterday when a handful of police personnel armed with high-powered rifles turned up to monitor a protest organised by human-rights lobby Jamaicans for Justice (JFJ) outside the St Andrew offices of the Ministry of National Security.

The policemen and women, armed with M5 and M16 rifles, took up position several metres away from the spot where most of the protesters had gathered.

Calling it "clearly ridiculous", JFJ's Executive Director Dr Carolyn Gomes cautioned the police to be careful about the signals they send.

"It can only be seen as intimidatory ... . It doesn't allow one to connect with the police in the way we are supposed to be connecting with them."

Convenor of the Jamaica Civil Society Coalition, Carol Narcisse, in expressing her personal views, said she was "struck" by the "quality" and the number of firearms that were on display, but stopped short of calling it intimidatory.

"I can't imagine that it was meant to intimidate," she told The Gleaner, while standing with other protesters along Oxford Road.

Asked if the show of force was synonymous with the often repeated claims of police excesses, Narcisse responded "perhaps it is".

She added: "It does seem over the top."

However Senior Superintendent James Forbes, who heads the Jamaica Constabulary Force's (JCF) Community Safety and Security Branch, defended the security measures put in place for the protest and bristled at claims it was meant to intimidate protesters.

Forbes pointed out that the police personnel with high-powered weapons were at least 80 feet from the protesters and stressed that they were only there as a "last line of defence" should something happen.

"If policemen in a vehicle 80 feet away is intimidating Dr Gomes, then one wonders the level of (her) imagination and how far it can stretch," Forbes responded.

He also noted that the security measures were put in place given the fact that the protest was taking place, without a permit, in the vicinity of the national security minister's offices.

Only a small number of persons turned out to support the protest that was called to bring attention to the recent spate of police killings.

More than 47 civilians have been killed by the police since the start of the year, with at least 27 coming this month.

Both National Security Minister Peter Bunting and Police Commissioner Owen Ellington have given a commitment to review the JCF's use-of-force policy.

However, Gomes and Narcisse both argued that the existing policy was adequate and should be enforced.

"It speaks about everything the commissioner said he is reviewing to put in place. So what we want is enforcement, not another policy that remains gathering dust on the shelf," Gomes said.

Gary Morrison, who is a resident of central Kingston, said he participated in the protest because he believed too many persons were being killed by the police and no one was being held accountable.

Like Narcisse and Gomes, Morrison was disappointed that more persons did not turn up to show support.